Let Them All Talk 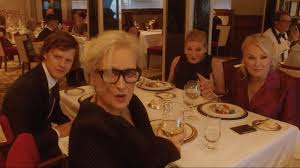 I won't say I got the purpose of, or loved, Let Them All Talk - an HBO movie from director Steven Soderbergh that stars Meryl Streep, Dianne Wiest, Candice Bergen and Lucas Hedges.
How can it not be good?
But it's not. It's not bad, but it's far from good.
Allegedly, the premise is taken from a short story and while the cast had an outline, the idea was for improvisation. Should that be the case - they didn't do very well, nor did Soderbergh give great direction or have a good editor. Things are disjointed.
Disjointed isn't always bad. Soderbergh has had those moments before, mostly in sex, lies & videotape - which for two or three moments there was a flash of that in this film.  But they're not enough of them and I'm not sure most are intentional.
This though - this, is wasted talent.
If true there was an outline, it was not fleshed out enough. Save Streep and Hedges, I'm not sure any other character knew what they were supposed to be doing - or why.
I think it could have all be plausible that three former friends who hadn't seen each other for decades got together for a trip from NYC to the UK - via the Queen Mary II - but they don't seem to have any kind of connection - or likability towards each other - to make this go.
I suspended disbelief - I know, right?  - thinking that all (any?) would be revealed as to the impetus of the invite. Just a minor spoiler alert:  don't hold your breath for it.
It's a toss up who is more greatly wasted in terms of talent. I'm gonna go with Wiest. There is potential pseudo-conflict with Bergen and Streep, only Meryl doesn't know it and it's barely addressed with her.....so it's wasted. And they made poor Candy a pathetic-like character. There is some fire to Bergen's character, but no final bite - so that's wasted too, but they kind of try with her. Wiest is used as wallpaper at best.
Hedges, who is more widely used still shows all the talent he's been putting for for the last 3-4 years. He's there for pivotal reasons, all of which just peter out. Again, not sure if it's "the outline", the improv or the director.
I would say the bigger, underutilized potential was another guest on the ship. Like Streep's "Alice", he too is a prolific author, versus her sparse but greatly more acclaimed status. This disparity is somewhat used effectively, but if they broadened it would have been interesting.
This isn't Streep's first time in a Soderbergh film. I completely forgot I watched the Laundromat last year on Netflix. I didn't review it, nor did I put it in my tally for films seen, so I was one closer to my 2020 goal. Clearly, it wasn't even memorable enough to do any of those two things.
Of course, I think Soderbergh is miss or hit (in that order).  The Oceans movies were......fair (11) to horrifically bad (13) and I didn't see Magic Mike, as I figure there's enough nekkid or semi-nekkid pics of Channing Tatum (Tatum Channing?) and / or Joe Maginello (or whatever his name might be) that I didn't need to pay for something I could get in .gif form.
While it wasn't as bad, as say, the Prom, I was underwhelmed. So much talent, so little of it used. Had they been a cast of unknowns, it might have held up a little better.
Might have!
....the trailer makes it look more interesting / intriguing than it is / was.
2021 Movie Count / Goal: 02 of 15
Song by: Elvis Costello & the Attractions
Posted by Blobby at 12:07 AM

Shame. I'd have eagerly gone to see this [if it's ever going to be possible] though now that the 'eagerly' has been removed.......Still probably will do should it ever come this way.

A one way top of the line passage NewYork to London is around 23,000 dollars , I read that two years ago. I was lost as to a plot after that!
I would watch the movie just for the cast! I love people who try to fix themselves! No matter the result!

Should have checked the web site 2350.Round trip. My first mistake ever. 😊

Saw The Limey when it first came out in the theatre. I thought it was raw and interesting. I saw Nightwatch. Liked it. Sex/Lies - it was okay. Rumor Has It was a waste of time and talent. So, meh. But this intrigues me. I would love these three ladies to waste two of my hours. Meryl really seems to be burning her legacy bucks these days doing whatever catches her fancy. I like that... she (and we) might get lucky that way.

An acquaintance's husband paints landscape portraits that appear in embassies all over the world (Tom Pacquette). One of his landscapes appears over the shoulder of Meryl Streep in this movie. His only comment: 'I should have made my signature bigger!'