As the World Falls Down 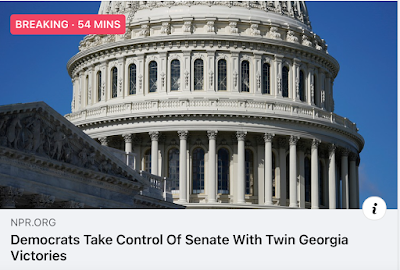 I will not let those motherfuckers be the face to today's blog.
Yes, they'll have words here, but not the image. This won't be their story. Kind of.
As of January 20th, the White House, the Senate and the House will be Democratically led.
Let's hope they don't fuck it up.
But yay to Georgia and their two new senators. Everyone involved helped - to paraphrase a friend of a friend - to have Mitch McConnell become what he hates most; a minority !!!
As for yesterday's electoral technicality / finalization count - well, I do believe a week or so ago, I predicted what would happen.
Mary Ingalls, in her later teen years, could have seen it coming.  The Capitol Police??...ehhhhhhhh....not so much.
While I don't think BLOTUS' inciting speech an hour before taking over the Capitol helped matter, the pieces were already in place. It was gonna happen anyway. Still, the Capitol Police - whomever runs them - should all be fired. Every. Single. One. Of. Them.
Years ago I was verbally berated in front of dozens for taking a picture in the Capitol visitor's center. If HALF that vitriol was channeled into physicality, they could have kept these fucking demons out. But instead, you see the police posing for selfies with this bunch. What the Actual Fuck? 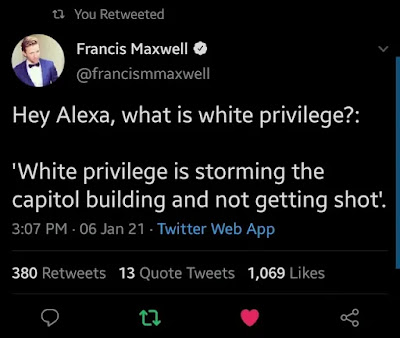 Now, I was working during most of this, so I didn't know what was going on. 710 and Morty texted and then a few others. But I had my head down most of the day buried in my job. Again, I wasn't happy about it. But I was far from surprised and kind of had a 'told ya so' running through my head.
And as of 20:22, as I draft this - for like the 4th time - I have yet to turn on the tv, nor do I plan to except to maybe watch an episode of Schitt's Creek. But I did check social media......which granted, was probably not the wisest thing to do.
While I love my friend Jeremy, he was talking about how we're better than this. We are not. Clearly. He was mentioning how we got through McCarthy and Nixon....etc.  This, yesterday, was not that.
This is 1979 Iran.  It's 1973 Chile or 1972-1980 Nicaragua. It's a 3rd world country revolution.
Another friend, and former co-worker, Philip, who is actually from Germany and only been in the U.S. for maybe four years (?) likened it to the Nazi's over the Weimarer Republic. To which he added: it’s sad! It’s devastating and shows that this country didn’t learn anything!
This isn't true, I replied: Don't kid yourself. We learned. The lesson learned was the wrong one, but they know exactly what they're doing. They had a playbook.
This isn't a fallacy. I've been preaching this for 4-5 years now.
And I've said this in other types of posts before, but I keep coming back to it again and again and again. Maybe 10+ years ago, I saw politico (for both Dems and GOP) David Gergen speak. It was about the decline and fall of dynasties (no, not Fallon and Sammy Jo) and how it only takes a generation to ruin a country or empire - including the U.S., which he felt was impending. He also predicted by 2029 the US wouldn't even be in the G20.  3rd world country, indeed.
At dinner, 710 and I had the discussion of a revolution  / coup / insurrection / whatever you want to call it, right in front of our eyes. He aptly said he took democracy for granted. I think we all did. And we were wrong. WAY wrong.
Alexander Hamilton, from the hip-hop musical Hamilton, once called democracy "an experiment". You'd think 245 years later we'd be out of beta-testing and into production. Alas, this is clearly not the case.
I've said it before - and most likely will again - but what we took 239 years to build has been brought down in five. In my lifetime we will not fix what we have damaged. After what I saw yesterday, I don't think we EVER will.
A generation is 20-30 years. If Gergen and the folks he quoted are correct, and we take into account only the last five years - we have less than twenty years till the fall of the United States.
Song by: David Bowie
Posted by Blobby at 12:07 AM

White Privilege caused this. Lack of preparation equal to the Black lives matters Marches caused this. White deplorables enabled by a white senate majority leader and exacerbated by a lunatic in the White House fanning the flames caused this, the personal political aspirations of every person who objected caused this. I believe this is a one time thing. Never again will someone so unqualified and so unstable be elected president and allowed freedom unchecked to do this. Mitch McConnellshould be held accountable for not recognizing Joe Biden’s victory November 4th. I won’t say I’m happy but this was the Perfect Storm, caused by giving one person all the rights that belong to 330 million of us. I think those to blame are chastised, are any or Will any be punished , probably not. Georgia white suburban women and Georgia black churches sent a message Tuesday, the path we are on is not acceptable.Gretchen Whitmers ordeal in Michigan should have warned us and we , let this happen. I don’t believe the United States is ending in 20 years - I believe we are picking ourselves up by our bootstraps and starting again, in 13 days!

Had these been BLM protesters, you would have nothing but piles of dead bodies. That these idiots are now trying to blame 'ANTIFA'? Absolutely vile. White privilege indeed - take no responsibility for your irresponsibility and blame others when possible. Why wasn't there a fence around the capitol yesterday? Because a percentage of the capitol police were in on this. They all must be held accountable. Hawley, Johnson, and Cruz need to be censored and forced to resign. The orange ogre needs to be kicked out NOW... invoke the 25th Pence - you white worm. Lost in all of this? A stupid woman opened the wrong door and got her neck blown to bits and is now dead. That's on Hawley. That's on Johnson and Cruz for continuing this charade. Tell the truth. Tell people the truth and stop spinning alternative universes where everybody gets a participation medal. We can and will repair this. Grandpa Joe better hitch up his pants and put his teeth in...

I sent this e-mail to my rep & senators this morning:

1/6/21 is a DISGRACEFUL blot on our history books! what are YOU going to do about it?