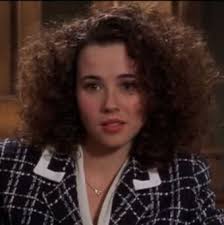 In my 12 of 12 last week I mentioned how the kitchen still smelled of curry from my cooking the evening before.

That smell would stick around for a few days. It was not horrible or anything, but the lingering odor is certainly distinguishable.

I used curry to make a pineapple chutney.

I had never made this before. I've had chutney before - but usually it was a mango variety, but I couldn't find a mango in Ohio......in January.

And of course, I've seen Chutney. I mean, Legally Blonde is possibly the most played movie on broadcast television since Overboard.

I just love that whomever wrote that movie opted to name a character 'Chutney'.

But here we are, a week later and we had salmon again last night. And we had all the fiixins for pineapple chutney. 710 liked it so much the first time - as did I - that I thought........oh, what the heck. 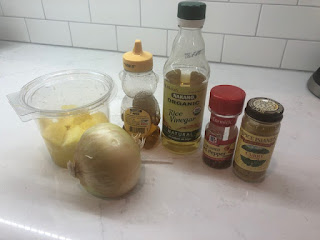 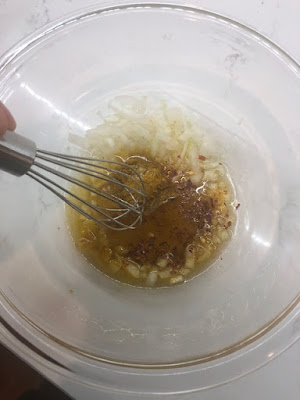 Mix / Whisk all the non-pineapple ingredients together. 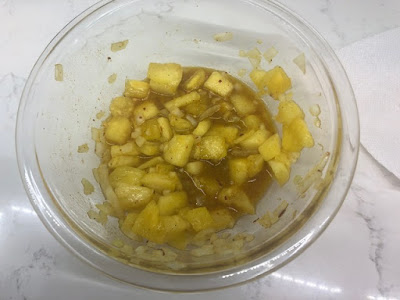 Then add the pineapple.  Last time I mixed all together and it was harder to incorporate the honey easily with the fruit already in the bowl. 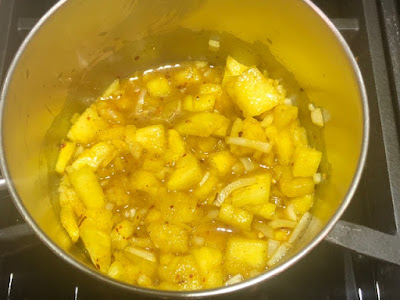 Simmer it for a bit. There is really no liquid other than the vinegar and honey. I guess some natural pineapple juices, but not lots. It doesn't really cook down much or thicken.
The flavours meld together here and everything warms through. 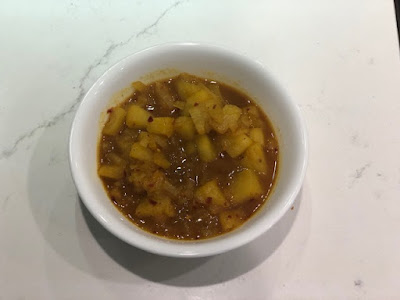 It looks much darker than it actually was. Lighting and all. 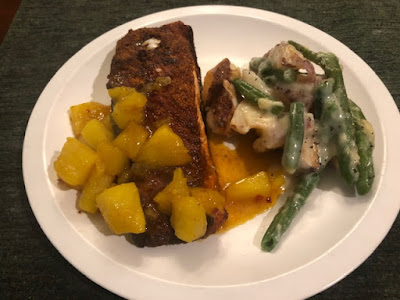 The sweetness of the pineapple pairs nicely with the savory curry and red pepper flakes. BTW, first time I did an eighth of a teaspoon, by "accident" this time I did a quarter. You could feel / taste the heat, but it was all in a good way.
The chutney is a good compliment to the salmon. We like it a lot, but we'll have to be careful not to overdue it too much. That shouldn't be a problem, since I don't usually have fresh pineapple in the house. But come mango season (is there a season?) look out..........I'm gonna be a-tryin' something else.
Posted by Blobby at 12:07 AM

'Legally Blonde' is one of quite a long list of films I've never seen, and aren't especially fussed to do so - a list that includes something as prominent as 'The African Queen', even though that seems to have been on at least once a fortnight for the last 50 years!

I don’t know about Chutney, sweet things on meat or fish I don’t know! We eat a honey pecan chicken salad with white grapes. The salmon and the green beans look delicious. The point was cooking with Blobby, which I love immensely! As for Legally Blonde, I liked Elle Woods, but especially Luke Wilson! I would watch the African Queen if I were to lose my eyesight the next day, good stuff, sink the Kaiser’s dreams on Lake Victoria!

I thought it looks scrumptious too