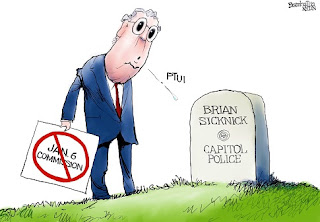 So I can't even begin to discuss my disgust and disappointment with the Senate and Congress. Both sides of the aisle.

The never to be commission on January 6th shows exactly how weak the Democrats are - and how heartless, soulless and brainless the Republicans are.

None of this is new. Yet I'm still mentally and ideologically crushed.

The Right had always said, this is BLM and Antifa driven - the people who were storming the Capitol.

If believed to be true, you'd honestly think they'd be wanting to get to the bottom of it all. But you know - as do they - that this is not true and that finger they're pointing, three more are pointing back at them. So, no way, no how is that happening in a public forum. Ever

That said, I have to had it to Bob for publishing the above political cartoon in his last Sunday post. I have shamelessly stolen it. Not just for this post.

During the 2020 election, I semi-came out of Twitter retirement. I'm not great at being there, or doing stuff with it, but I have now opted to visit my account daily. 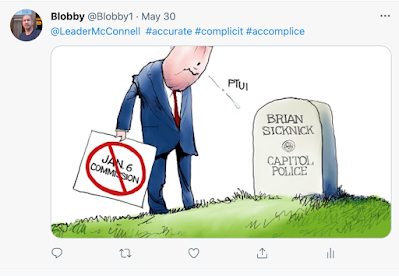 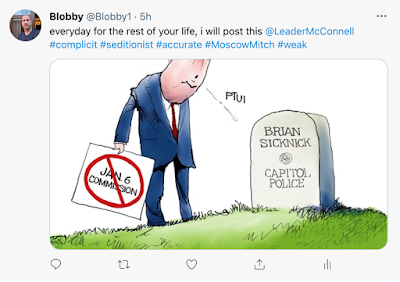 Once a day, every day, I will be posting this to "Leader" McConnell's Twitter feed.  Until the day he fucking dies.

I mean, it would be great if I only had to post for another 2.5 weeks, but.......the walking dead are really tough to get rid of.

I have a feeling by the end of week 2.5, one of his crony interns will have blocked me from his site, but maybe @blobby2 and @blobby3 and then @blobby4 will appear.  One just never knows, does one?

I am a hateful and spiteful man - or can be. No reason someone shouldn't be the beneficiary of all that excess energy.

How can anyone NOT share your exasperation? TOO many I fear.

I think if they would indict and try ,sentence and send to jail, the 500 odd arrested seditionists, then my worry over the January 6 commission would be non-existent. Throw in a charge on Michael Flynn for Treason and I’d be ecstatic!