My App of the Month?  It's another NYT game.

If you remember, Spelling Bee was one of these a while back.

The Times has a number of games. At least three crossword puzzles, the Bee (which I still play daily), Tiles, something else - which I'm not allowed to play because I have to leave it for 710.  That's fair.

But I just found Letter Boxed.  710 swears it has always been there, but I have never seen it in the hundreds of times I've been to the NYT site. 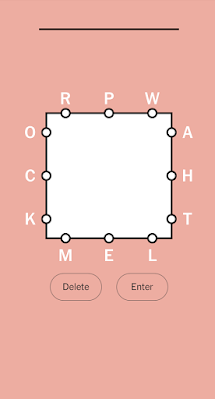 As you can see, you get letters in a square. Or box. You draw lines from one letter to the next in order to spell words.
HOWEVER, you cannot use letters in/on the same line (i.e.  if you are on M, you could not use E or L as your next letters).  You have to go to another area of the board to use those letters. 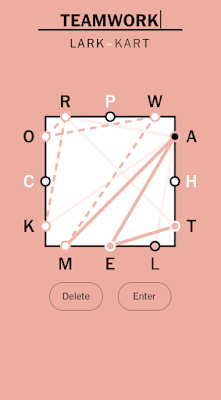 The idea is to use all the letters at least once to 'win' the game.  But wait - there is more!  You can start on any letter, but the last letter of your word becomes the first letter of your next word.

But wait - there's more!  The idea is to use all the letters in the least amount of moves / words.  The goal, from the makers, is five words or less. 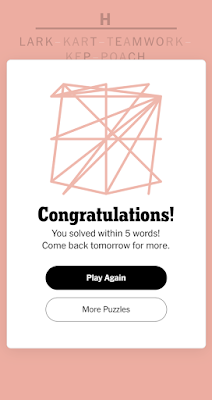 My goal is four.  Actually it is three. Often I can do it in four.

I didn't make it with this game, as the K really fucked me up being on the same row as C.  And the fact there weren't a lot of letters you could spell.

It will take five minutes of your day - and tease your brain a little.

Oh, So you are a dude ! A much more patient dude than me! Happy Wednesday, Blobby and 710