It All Depends On You 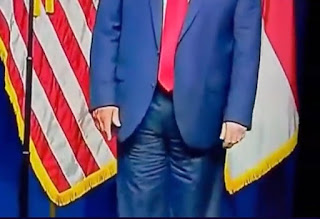 This is internet gold.

BLOTUS' speech in North Carolina this last weekend - no one knows what it was about, because eventually he stepped from behind the podium.

First reports were that his tailor just hated him.

I mean, that could SO be the case, right? And chances are, said tailor got stiffed for making his suits - and to add insult to injury had to measure his inseam {shudder!!!}.

But then people took note.

There is no fly on his pants, leading to the thought that this dumbfuck put his pants on backwards. Some have said the glare from the light obscured the view of the zipper.

I'm all for a good conspiracy - I mean, isn't that what the GOP loves?  - but honestly, I think someone would know that as you buckle up, you're not doing it from behind.

Then came the diaper theories.

This all makes much more sense.

He is 74. Or something. Incontinence isn't out of the realm of possibility probability. Still all those shows on the golf course always looks like he's been carrying around a full load in his pants anyways. The incontinence might not just be urine. Fecal could be playing a part.

While I get Pappy Joe's Rehoboth Beach photo op on a bike was probably just that (he probably went around the corner, got off the bike and into a car), at least he looked vibrant, not that he just pinched a loaf in Greenville, NC

Honestly, I might have just written this whole entry just to write 'pinched a loaf'. It's just a bonus that it is directed at this turd of a man.

I thought we flushed that turd, on November 3rd.

Former guy needs Spanx , and a dietician that makes out calls to a prison cell!