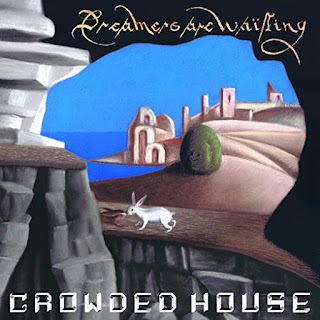 Crowded House - and actually, Neil Finn - ranks up there as some of my favourite artists. Their first four albums as a band (especially Woodface and Together Alone) are just some great works of art.

Since drummer Paul Hester's suicide, the band has struggled with it's identity - members coming and going, and none of them memorable. CH went from being a band to Neil Finn's back-up band in a way.  I loved the disk Time on Earth, but have struggled to sit through 2010's Intriguer.

They are now back with a different band, and a new disk.

Dreamers are Waiting (horrible font on that cover, no?) is fair to middling.

I've accepted long ago nothing is going to be as good as Together Alone. And it's better than Intriguer. But as of now, it's not better than Time on Earth.

There are just no WOW factors that Finn always slips in his songs. Some of Finn's writing subversive the way the showing of his talent just sneaks in - it is usually not overt, though there were moments of stopping anything I was doing to listen.

They might come closest in the opening track "Bad Times Good", which oddly is (mostly) a band composition. Though for the six songs Finn wrote by himself, "Show Me the Way", "To the Island" (a very strong track with some non-traditional backing vocals - with a little Beach Boys vibe) and "Real Live Woman", shine over the material - though the song he wrong with brother Tim (always a welcome addition), "Too Good For This World" is different and good. A shame his brother didn't sing on it - as their disks together are great.

Dreamers are Waiting is a nice effort. It's not Time on Earth, and it's not as strong as Finn's last solo disk (which I came to adore!). I think Hester is missed more than I anticipated. I don't think the nepotism of his sons playing hampers this - they are clearly talented musicians.

I hope like some of later Crowded House and Finn disks this grows on me more. It has the potential, but a month in - it's just not there.  Yet.