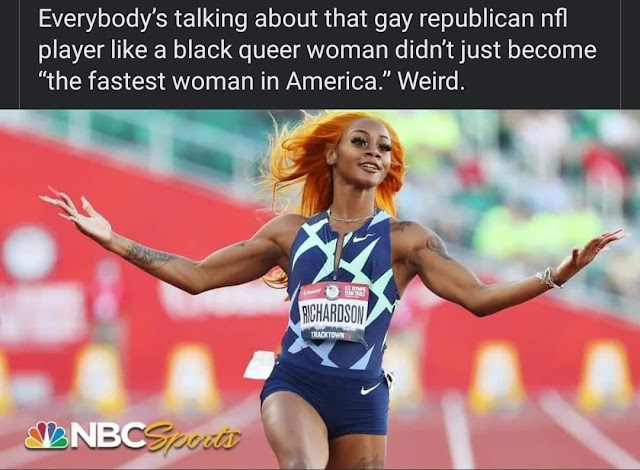 A.  I didn't know the actively gay football player.........ummm......active football player who happens to be gay......is / was a republican.  Had I known, I would have at least included that fact with a disclaimer.  Hell, I might not even have posted it at all.
B. I am as guilty as anyone about not knowing the above story and facts. Had I known, I'd have posted about Sha'Carri Richardson instead of the football guy - who is probably no longer a tight end..................if you know what I mean. Perhaps now he is a wide receiver................if you know what I mean.
Of course there are a number of reasons the A story got the attention and not the B.
1.  Well............track isn't football.  Let's be honest, track & field doesn't really have the caché or dollars to control the media feed.
2. Sha'Carri is a woman.
3. Sha'Carri is black.
4. Sha'Carri is gay.
5. Sha'Carri is a black, gay woman.
It could be any combination of 2-4, but let's be frank: it's #5.
Unless you are number one in your sport (Simone Biles or Venus Williams.....no, not you Serena) or discuss mental health issues (Naomi Osaka) you basically do not get 'air time'. No doubt worse if you're gay.
So even in the gay sports world - it still is the white male who rules the roost. And that is a fucking shame.
Don't get me wrong - even I didn't know this or see it, so I am guilty of this too. It's time to be better.
Song by: Garbage
Posted by Blobby at 12:07 AM

People shouldn’t make statements They “can’t run away from” . Blobby, you saw those eyes and that hair color and you thought she was the quiet type?

There is a considerable difference between a guy coming out while still being active in the most hyper masculine game on earth, and a gay black woman setting a record in a sport loaded with both black and gay women, several of whom have held the record. This notion that it wasn't as big of a story because shes gay, black, and female is manufactured divisive propaganda (that you fell for).

Also, the football player had no political message other then gay pride and representation. He is making strides in one of the most homophobic occupations in the country. That takes serious guts and he is making strides for everyone.

Why would you write him off for his political leanings? That is literal prejudice and discrimination, in which you become what you claim to hate.

Are you sure your ideology hasn't been tainted by an amalgam of news broadcasts and internet message board propaganda? I know you are normally a very rational person.

I hope we always strive to be better; it is a lifelong progress.