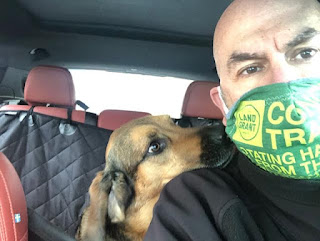 This past Sunday, I tried a little experiment.
It used to be when 710 went to the office, he'd hit the grocery store every Tuesday on his way home. But that was 15 months ago.
As he has almost strictly working from home and I had been mostly going into the office, we thought it wise for me to take over that duty. No reason to expose both of us to outside germs and possible death.
So every Sunday morning, I slog off to the grocery store to pick up provisions. And I was going to the fancy store too - because they truly limited how many people could come in - and sometimes I'd have to wait outside in the freezing cold for 20 minutes for my turn. I was good with it.
You'll be axing why not delivery or curbside pick-up, etc.  For one, I'm not a planner that way. You had to order sometimes days or a week ahead of time, as the demand was so great. And honestly, no one was picking out my produce but me - let alone their substitutions for things.
But now, 15 months later, and even though the requirements for masks has been lifted in Ohio, I had not gone anywhere, other than dog walks, without one.
.....until last Sunday.
I got to the parking lot and made a conscious decision to not wear a mask in the store.
I won't lie - it felt freak as fuck. It felt wrong. It felt weird.
And save for the store staff, I think I only passed four shoppers who were wearing them. So then I felt guilty for not wearing one.
I don't know yet what the right balance is for having one or not. Oddly, I had to stop at a second store because the first one didn't have something 710 wanted.  I went in with a mask and was immediately calmer.
For the foreseeable future, masks will stay I think. I have to wear one at work, and that just might be the way work is from now on. I mean, i LOVED not getting a cold that lasts 10 days during this last year. Flu shot or not, I think Blobby will be wearing a mask during flu season.
At least that's my thought right now.
Song by: Rachel Sweet
Posted by Blobby at 12:07 AM

Email ThisBlogThis!Share to TwitterShare to FacebookShare to Pinterest
Labels: Covid

We probably will look like zombies, but for the future at least until Christmas, I can’t see us not wearing a mask inside retail establishments! The Delta Variant is where we live, and even though , the Pfizer’s one and Two that we took should give us a leg up on everything. I don’t want anything! They say we need boosters, my internist had his vaccine in December 2020. I just don’t want to go maskless yet!

I went to the office yesterday, all day, to work, like the olden days.

As I've posted elsewhere, wear a mask so that you're not mistaken for a Trumpian Republican. Also, it works for pollen and leafblower dust.