While I have been back to Columbus any number of times since 710 and I moved from there a QUARTER OF A CENTURY AGO (!!!), I've only been past one of my residences once or twice - one of them being 10 years ago.

The street, E. Poplar, doesn't even show up anymore on Goooooooogle Maps. The west side does, and if you type in East, it takes you to West. Technically Google isn't wrong, I suppose? The east side has been blocked, so there is no actual street or traffic, except for the foot kind.

There were a few businesses at street level: a dry cleaners, some art studio that I always assumed was a front for something else.

But if Goooooooogle Maps is correct, hard times has hit our building. I'm assuming the picture has been since I last went by in 2011. 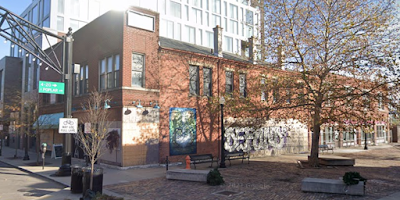 Now it's fenced off and tagged. A semi-end of an era.

Semi because it's the Short North. Home to pseudo-gentrification, no parking and sky-high pricing. So, it's not like the building or location - which did have fun views when Morty, Dith, the ghost and I lived there. I'm not sure what, if anything, has gotten in the way of those now.

I'll assume it will still be good for people watching on Gallery Hop nights once the renovated building goes into place.

Save the glass enclosure and the rooftop terrace - avec foliage - the place looks similar. I'm assuming the rents will be astronomical. 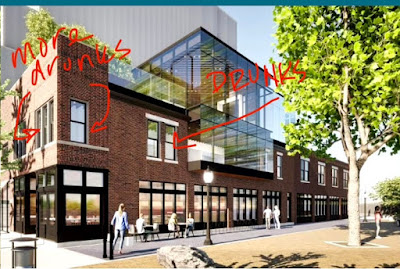 Friend "Becky" opted to mock up this rendering. For the record, I just resided in the Drunk apartment. Morty and Dith were More Drunk.........but if we're splitting hairs, she really just means Morty.

I'll assume, anyone who moves in to 10 E....Whatever Ave. will share the space with the ghost. ......assuming he can still afford the rent.

Ghosts collect the rent. Looks like a nice place to live.

I wish I could remember the years we lived there. Well, I lived there twice.

Ghost? I usually get along quite well with them.

I have relations in Columbus I have not seen since I was ten.
It would be fascinating to go and look them up and see the sights.
I like ghosts too.