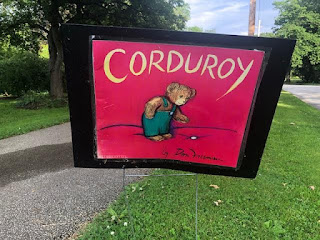 We have a number of parks where we walk during the week - after work and avec Shep. Most involve lakes. Most are a mile or two around, so we get in our steps.

But as Cookie can attest, Shaker Hts, is a special place. The Baroness in the Sound of Music is from there, as was Paul Newman and Molly Shannon from SNL fame.  Well, Molly as on SNL.  Not so much Paul.

Oh, and my parents.

But it's a semi-liberal community that used to the landing place for Jews all over NE Ohio. It's a little less so now, as sprawl has taken them to - ugh - the suburbs.

Still, now it's got a great socio-economic mix and some great public works stuff - including said parks of which I mention.

I pass Horseshoe Lake now and then on my way to my second office and have seen signs out around one side of the lake. As we hadn't walked there for a bit,  I didn't know what they were. As it turns out - it's a story.

Someone took a children's book, Corduroy, and pasted the cover (above) and the pages (below) on signs and placed them next to the walkway.  And we made the walk yesterday. 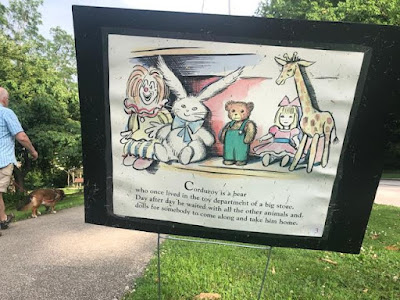 One page per sign - and each one placed 30 ft or so apart. 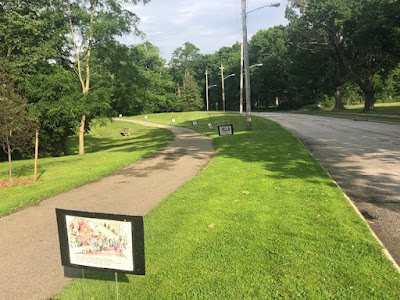 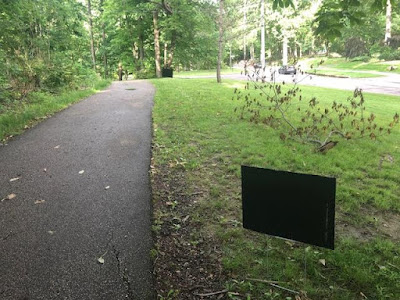 I hope it was the elements and not some dick humans who destroyed two pages of the book. I have no idea what we missed about a stuffed bear in search of a button for his overalls - and a home.
Luckily, they weren't the last two pages, so we back-storied what might have happened.  (I'm guessing it involved a sleepy time car ride.) 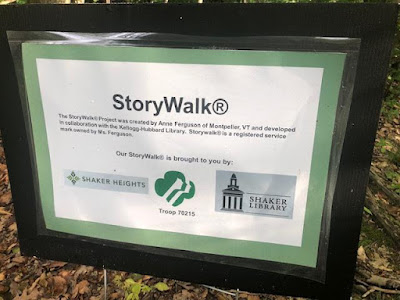 But special thanks to the Girl Scouts, the city and their library for making this happen.
It's so simple, yet it made me so happy.

“There is no Frigate , like a book to take you worlds away”……

what a splendid notion !
I have a vague recollection of this book. I would read it on a walk.