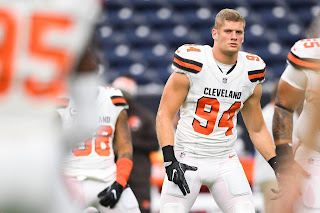 I'm not saying the Cleveland Browns turned Carl Nassib gay - but I'm not not saying it.
Sure sure - he didn't come out until he was an Oakland Vegas Raider, but you know Cleveburgh had to play a role in it.  It gets cold here - you gotta cuddle with someone.
But yay Carl - the first openly gay active member of the NFL.
For those keeping score - that is one homo in the NFL's 101 year history.
Of course, there have been others. Statistically there has had to have been. I'm sure there were suspicions. Or the folks we had hopes were.......... 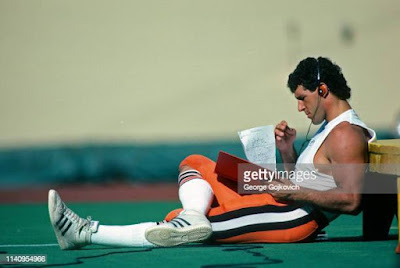 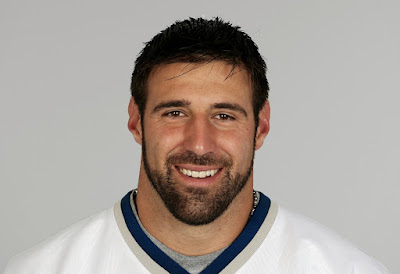 I'll be curious to see what the true reaction is.  Not the Pride Month reaction. The September, start of the season, reaction. Not the NFL/Raiders press release version, but the rubber hitting the road rendition.
The NFL hasn't been great about dealing with domestic abuse, sex trafficking (yes, YOU Robert Kraft!), dog fighting, murder - or {gasp} racism.  Homophobia should be on their big list of oversights too, no?
But good for Carl to pave the way. Maybe others will do the same.............Tim Tebow.
......and I think Carl and everyone can be thankful he didn't play for Green Bay.
Song by: Florence + the Machine
Posted by Blobby at 12:07 AM

Tebow has a beard, bought and paid for and Mommy’s got his balls. I know the player in Gainesville that took his 🍒. I like that it’s a white guy 6’7” a former Other franchise/Now Las Vegas Player with Earnest money coming his way. I.hope he stands up for what’s right The Donation-to the Trevor Project is exceptional.Be safe , be happy. You did the right thing. I’m proud of you, welcome out . I hope you thrive and are the first of many who can live their truth!

You saved the zinger for the last line,