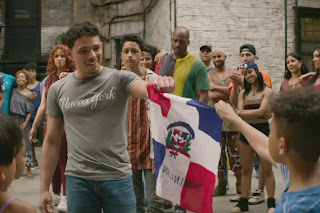 I'll give this to Lin Manuel Miranda - he has a style.

While his Broadway production of In the Heights came years before the way more popular Hamilton, clearly he just continued on with his style from one to the next.

The rhythm, the patter, the pattern, the notes don't really vary that much. The words do, but......that's about it.

If you want to put too fine a look upon it, both plays are about men who came from the Caribbean to New York looking to find their place along with love.

I don't know that In the Heights would have made the leap from Broadway to film had Hamilton not been such a mega-success. Yet, here we are, as it appeared on HBO (and in cinemas?) this last weekend.

For a guy who doesn't really care for musicals, I certainly see more than my fair share. Of course, I blame my mother. Nurture will tell you that you cant' be raised in a house that watches every Rodgers & Hammerstein move repeatedly and not pick up something.

Anthony Ramos, who was also in Hamilton, stars in the role that Miranda has on stage. Luckily (?) he is bit player in the movie version as is Chris Jackson (swoon!) who was George Washington in Hamilton and a secondary lead in Heights stage version.

I think Latin culture is woefully under represented in movies, and when it is, it's things like Scarface, Sicario, and West Side Story (the latter has a Spielberg version coming out..............where Tony is an alien!!!........just kidding on the alien part).

So I will take any positive story about the culture, even if if means enduring mostly sub-par songs.

The stories themselves are ok, if not predictable (and they are!) and a lot of the acting plays to the back of the room. That could be Latin culture or just Broadway holdovers. Or both.

Smits is to dancing what Pierce Brosnan is to singing.  Or acting, when you really come to think about it.

In the Heights is long - over 2.5 hours and flashy / stagey, but the shots and filming are well done (directed by the guy who did Crazy Rich Asians).   It gets a B. I saw it.........I don't think I need to revisit it though.

I've liked Lin-Manuel since I first became aware of him two or three years ago. Seems a nice chap, maybe even very nice. I was also very taken indeed with 'Hamilton' despite only having seen it on screen on my laptop, though watched twice [thanks to Lord A.L. Webber]. My opinion of him increased still further on hearing in an interview of his HUGE admiration for Sondheim.
I'd sure like to see this latest of his though I'm aware of the stick it's getting for having no Latin-Americans in its major roles in spite of that area having such a large body of such, something which L-M.M. now acknowledges and regrets. Still want to see it though.

Hmm... I really enjoyed the musical but that genre doesn't always lend itself to the movie format. There is something special about seeing musicals live and I loved seeing The Heights on stage. I'll probably check this out but now I'm thinking I'd rather see it at home.