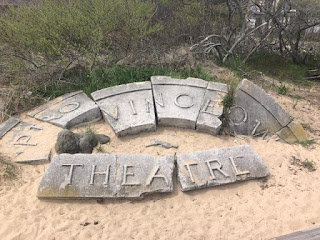 So yes, I went, stayed, and came back from Provincetown.
Alone, but not alone.
A week before departure, 710 had to cancel. Work emergency. And in theory he could have worked remotely, it meant him losing two work days with travel and still being inside all day long. No fun for him.
But I was at the point of work burnout, so we discussed and decided I should still go. The 11.5 hour drive alone was no fun (8 in the POURING rain), but it wasn't horrid either.
I was meeting friends, Becky & Andrew there, though staying in a separate airbnb.  Cute, huh? 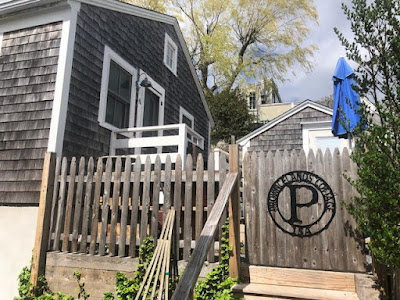 What they didn't know is, that I was surprising them by inviting Georty to be there too.
With some planning, I got Georty  to "just show up" at what turn out to be an expensive happy hour. Hours. Plural.  I also got my Academy Award playing friend, Mike, and his husband Peter to show up too. They live in P-town, for the most part, year 'round.
I was a little hesitant for Mike to meet the others - and vice versa. I felt there was no scenario that would end well for me.  Thank yaweh for state laws not allowing more than 6 people together.  We had to split into separate groups.
I'd like to say Mike and Peter were the reason for the expensive happy hour, but even I can't put the blame on them.
I know dinner was had that first night, but for the life of me, I couldn't tell you what I ordered or ate. I might have been drunk. Ditto with the next night, where we never left Georty's place. Dinner?  No. Not technically. Wine and beer? Yes. Technically.
Things were very chill. We hung out together, or not. I hit Joe Coffee each morning, sometimes joined by Mike......... 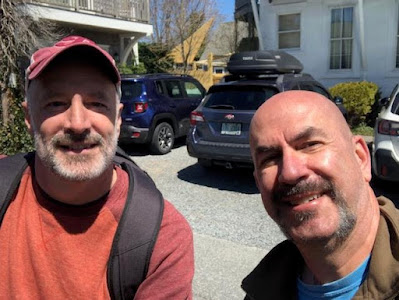 .....sometimes not.
I enjoyed hanging with Mike, and his hubby. And Ollie. I think they liked hanging with me (though Ollie is totally indifferent to me - rude!). They had me over for dinner, which was extremely nice. I mean, I still got tipsy, but........not drunk. And I saw a nice piece of art on the way back from their place.
Not that any of you'd remember, but Mike once had a blog - which is how we met. So, our friendship goes back at least 11 years. I think that's stronger and longer than when most people meet on Tinder or farmersonly.
I think.
As we were leaving having coffee, I ran into another ex-blogger, John from I've Got Something to Say, which oddly wasn't purposefully ironically named. 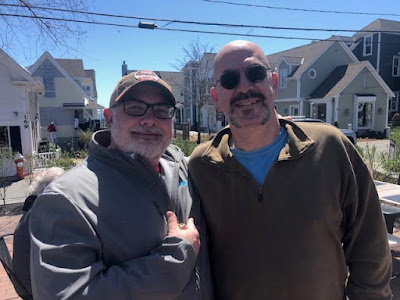 I had not seen John for almost 10 years.
He almost didn't recognize me - but that could have been the mask.............or the decade that had passed. To be fair, John struggled to remember the name of his ex-blog when Mike inquired. So, it could all be early on-set dementia.
Oh, I also ran into BosGuy too, but we didn't get a picture.
It was nice to see familiar faces and new ones. Though there weren't tons of folks there which was a good transition from Covid to the 'real' world.  My first restaurants in well over a year. Or in someone else's house (well, that wasn't my sister's - that once). Or the hugs.
But things closed up by 21:00. Two nights I walked "home" without seeing one person. Everyone was tucked away for the night.
It was tres nice to get away. Not as much to come back to hundreds of work emails, but it comes with the territory.
It was great to see friends - all of them. And it was - and I won't lie - good to get drunk. I got home by myself and I don't think I even stumbled.
I think.
Song by: Fitz and the Tantrums
Posted by Blobby at 12:07 AM

Glad you got a break. Check your liver enzymes 😊

Sounds like a nice trip, at least the parts of it you can remember,

Glad you had fun out in Provincetown. I wish it had been a bit warmer, but I suppose the weather was what is to be expected for early May out on the Cape.

all of us need to start reclaiming our lives, once we are fully vaxxed. you had a good time. all that driving though would freak me out.