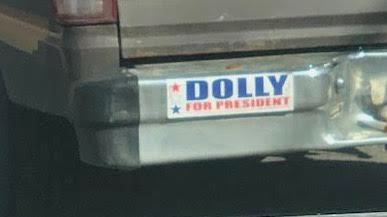 So, Dolly Parton has a documentary out on Netflix.  I thought it was 'new', but evidently Here I Am came out almost two years ago. So, I'm late to the party.
I know enough about Parton and save a few songs, or her work with Linda Ronstadt & Emmylou Harris, I don't really have anything she's done.
I knew enough about her that nothing was revealing in the slightest. It was kind of a puff piece - with two of the bigger portions of commentary going to - and I kid you not - Kylie Minogue and that creepy chick from 4 Non Blonds - Linda Perry.  Sure, Fonda and Tomlin appear.  Harris and Ronstadt did not. Nor is Trio even touched on in the slightest.
It is very specific to 2-3 areas of her career and that's it. The movie doesn't deviate that much. Of the hundreds of songs she's written and / or recorded, you get 4-5 of them. Maybe a few snippets more of some on Porter Waggoner Show.  And most of the songs are one you'd assume.
Dolly seems affable - she always has. There's lot of "golllll / shucks" moments which are cute but highly superficial.
I think it's 90 minutes, which isn't too much of a time suck.  But unless you're a big fan - you don't need to rush out and see it.

Song by: Dolly Parton
Posted by Blobby at 12:07 AM

I think I saw this recently. I was also curious as to why they didn't include Ronstadt and Harris, when Trio was such a cool thing (to me, anyway). I seem to remember another recent documentary about Trio, so maybe the makers of this film thought that topic had been covered.

Didn't Parton say, "It takes a lot of money to look this cheap!" ?

After a little research, I think what I'm remembering about Trio was part of the Ronstadt documentary, "The Sound of My Voice."

I’m not sure Even Dolly knows who Dolly is, she is so superficially happy , that I think she’s forgotten where sadness and happiness meet. I like her , but if I ever met her I’d want to learn something about her other than her well controlled angelic perfection. I think she’s done a lot of good things, for Sevier County ,Tennessee , her family and the Moderna vaccine. Which , she did not single handedly fund. I don’t know that I need any more Dolly than I get . She is universally well loved and respected and has turned into a great financial cushion! I like a collaboration album Honky Tonk Angels, with Loretta, Lynn and Tammy Wynette. Especially one song, “Silver Threads and Golden Needles”
Definitely, not Alison Krauss , music.