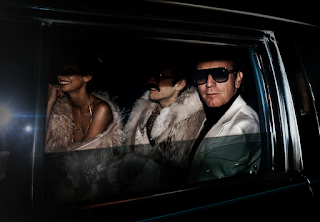 We are starting to watch Halston on Netflix. We didn't realize it was a series and not a one-time 'movie' event.
Live and learn.
It's not really that I care about the man - as I know next to nothing about him.
Some of you have seen how I dress, so I know you know I don't care about fashion.
And while I'm pseudo-associated with the era, on the other hand I'm not.  Yes, I was alive in the 60's-90's, but.........I wasn't much of a participant. Not really.
But I like Ewan McGregor enough. More Big Fish good than scary Trainspotting good. This falls somewhere in between, Maybe he's not supposed to be, but Halston isn't a much of a likable character, so it's hard (so far) to truly see him as a protagonist here,
Also, so far, this isn't a Mrs. Maizel, where the sets are so 'wow' that you feel like you're in that era. While not necessarily done on the cheap, they didn't seem to go out of the way in production design.
It does seem that Netflix shows have lots of ratings that includes 'smoking' and honestly there isn't one scene in this yet where McGregor isn't smoking.  Fran Lebowitz' Pretend It's a City has the same warning, and while Fran is a chain smoker and they discuss  it in that series, I don't think you ever see her with a cigarette.  But after the first episode here, I just assume I have lung cancer
There are only 5 episodes, so it won't be a big time suck (like say, Ryan Murphy's Hollywood turned out to be), but it does concern me that it's being billed as Season 1.

Song by: the Lovemakers
Posted by Blobby at 12:07 AM

I guess you had to be there. I think of Halston Z-14 that I wore earlier in my life , poor Halston a lot of Smoke and Cheap cologne.
I wanted to mention the Sudden Death of one of the readers of this blog , and a Blogger in her own Right. Anne Marie in Philly. She died unexpectedly Thursday May 27, 2021. She was a well loved member of the Joe My God blog community, and we are heartbroken. She was also a Huge fan of Sophie and Shep, as well as you and 710. She was a monthly donor to national public Radio in Philadelphia! Thanks, Blobby!