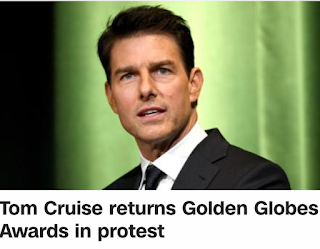 If it weren't so funny, I wouldn't laugh. But it is.
An award that literally no one cares about - except for Mike, to extract prizes for his contest wins - is in a diversity (as in, lack of) controversy.
S. N. O. R. E.
Until this last two years, welcome to the Academy Awards.  And Emmys. And Tonys.  And Nickelodeon.  Oh - and every Country Music Award Show.
I mean, what the fuck are people talking about the Golden Globes for?  Of course they have a diversity issue. But so does Hollywood with deciding between Julia Roberts or Sandra Bullock - and only those two - for any role.
The Hollywood Foreign Press has given best acting awards to Madonna and Pia Zadora. I don't think 'diversity' is in their vocabulary, like the word 'talent' isn't either.
I'm not sure who raised the flag on the Globes, or that they've been singled out - as they are all guilty of this. ABC hasn't pulled the plug on airing the Oscars, though NBC has for the Globes. Of course, the sub-basement dwelling ratings probably was a money loser for them in the first place.
Of course, I am howling over the headline above.
My cynical self - or as I call it, 'myself' - assumes Cruise is getting out ahead of something else that makes him look bad. I mean, he and Scientology is the whitest of the white, right?  Sure, the 8.916 Mission Impossible movies has Vingh Rhames - but honestly, that is where diversity ended in those movies. Unless a 5'4" closeted gay man equals 'diverse'.
I watched the Globes for two reasons - one to see Ricky Gervais just slaughter those in front of him, and they had to semi-laugh in hopes of no attention on them. The second was to see how badly I'd lose to Mike.  That is less funny.
Song by: Fall Out Boy
Posted by Blobby at 12:07 AM

I’m really proud of the 9 Academy Awards, Tom Cruise has won for “Mission Impossibles’ 1-9( sarcasm) Can’t be believe he threw away his life’s work in a Cardboard Box! Scientology is weeping today!

every fucking award show is stupid and lily white. I don't give five fat flying fucks if ALL of them went defunct and outta business today.

I agree with Anne Marie. The awards shows really don't mean anything. I never understood any of it. Movies and such are for our enjoyment and entertainment. Why does everything have to be a competition and dress up event?

Award shows are so yesterday.