I know it's Cinco de Mayo. I know that, in theory, that is mostly about tequila. In fairness, I celebrated early by drinking a - and my apologies to Harper Lee - Tequila Mockingbird.

So that drink was had in P-town, which is gay, Gay, GAY.

Actually, it is and isn't. My last time there seemed exhausting - as everything was Gay 24 x 7. Maybe because it was off season (barely) and Covid, it was a good mix. And many things were still not open.

Alas, the liquor store was. Wine was bought. But they had Absolut bottles with the Roy G Biv colours and the such. 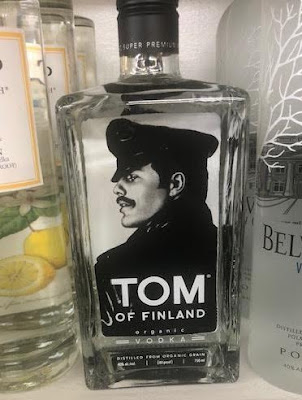 Morty was more amazed it wasn't tied into the Finlandia brand of vodkas, which does seem like a missed marketing opportunity.

And if it smelled like black leather, they might get more sales from a faction of the gay vodka buying public.

I stuck with the wine.

I’m lucky I don’t drink anymore, I’d love to see P’town in style but I never could just drink one! Funny that someone has capitalized on TofF booze. So few people except nerds like my Science teacher and now me , really even knew what ROY G BIV was. Now I know that the spectrum will survive even if its memory is kept only by a man in Cleveland Ohio, who saw it on a Vodka bottle. Tell Morty , there is a reason they used the old terms, well brands and call brands. Glad you are back in plain sight.

I might buy that bottle, and I am not a big vodka drinker.