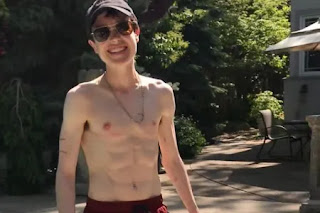 Is is wrong that I'm envious of the abs of guy who used to be a lesbian and before that identified as a straight woman?
.....because I am.
I mean, I suppose it would be easier to go to the gym regularly, cut down on drinking and sugar  - but you know.......maybe the Elliot Page way is THE way.
Perhaps he should give up acting and just join a boy band. He'd be the cute and hot one.
For me, unless I'm IN the water, I'm not even walking around shirtless at the beach. From the beach to the water - and then back to my towel and shirt.
I'm loving Page though. He is doing this in the semi-public eye, through carefully distributed stories - but oddly I don't think for his gain personally or professionally. He is normalizing - to a fucked up country (or certain factions of it) - the transition of a trans person.
No offense to Chaz Bono, and while he was one of the first "celebrity" (big on the quotes part) trans person, he kind of didn't blaze the trail you'd have thought.  .......and don't start me on Caitlyn Jenner - my lord, she could just star in douche commercials........they don't even need water, vinegar or the bag.
I totally get it's a personal thing - and a private one. But if more who are of note (and yes, I know how horrible that sounds) were to be at the forefront, perhaps it wouldn't be so horrible for those who are everyday Joes and Josephines.  Or maybe there wouldn't be such (read: any) issues about bathroom usage.
I'm quite interested in where Page goes next, and what he does.  At this point, I'm just hoping he doesn't have a bigger dick than mine.
Song by: Book of Love
Posted by Blobby at 12:07 AM

Email ThisBlogThis!Share to TwitterShare to FacebookShare to Pinterest
Labels: Trans

I have to admit - Elliot Page is doing this in a mainstream fashion, and not like Caitlyn Jenner who could have had a clean slate beginning, but decided it was better to continue the Kardashian circus freak lifestyle.

Lest we forget, Christine Jorgenson was there before anyone.

I have always been jealous of folks with flat stomachs.