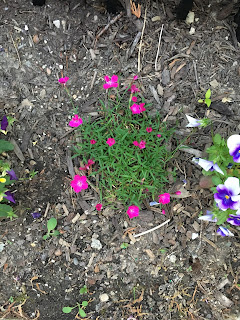 A women I work with sent me this pic.

While never actually meeting my mother, she attended my mother's celebration of life almost two years ago.

During that event, we gave out packs of flower seeds, so people could plant them and think of my mother - who was an avid gardener, but couldn't keep a flower alive to save her own. My mother was all about plants - big and small. And trees.

She did a planter year one. And two. The sprouted green, and that's it. Now and then I would get a photo update of what to me looked like something you'd want to spray Round-Up on.

She, nay - her 85 year old mother! - actually "wintered" the sprouts. Two winters in a row.  Now, granted, I really don't know what any of that means, because, ultimately, I'm not sure I care that much, but it seemed like a lot of work for a packet of seeds that probably cost me $0.49.

I can tell you, we didn't try that hard with out batch. Instead of seeing it through, we sold the house tow which they were planted. That seemed easier than tending to a garden - even it was in my mother's memory.

“You’ve either got it, or you don’t” In life the prize goes to the persistent. It is just so amazing to me in life that there are people in this world , that keep watch , until the pieces fall into place like they’re supposed to.