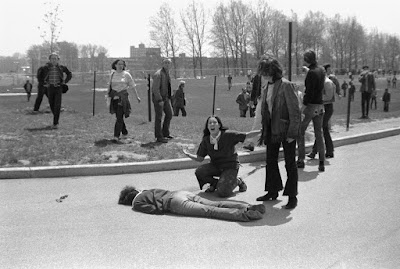 While I know it's Star Wars Day, and I know you know it's Star Wars Day, I'll take a year off from that post.
It's also the 51st anniversary of the Kent State shootings.
....and no, I refuse to call this post, "Ohio". I can tolerate the song, but it's never been high on a must-play list.
KSU actually had big plans for the 50th, and finally really really recognizing the history of it all.
For those in the dark, the site of the shootings had been made into a parking lot....literally covering up their history. Then awkwardly placed markers were put up in said lot of the four where they died. Allegedly, it's all been redone, but I haven't been down there for years.
Of course, Kent State was also the site of another tragedy.  I took my first round of SATs there. Luckily, I did far far better on my ACTs.
Yes, I grew up not far from Kent State. In very distant ways, I have some ties to some of those who were shot - not died. One who was paralyzed was a teacher in my high school. We crossed paths my freshmen year only and then he left. Another taught at my sister's school.
That same sister ended up doing her last two years of college at Kent State, and it was the place to go to do underaged drinking....................I've heard.
Mind you, then the drinking age was 18. So one might have been younger than that to get drunk there.   ......I've heard.
Since moving back to NE Ohio a quarter of a century (!!!!) ago, I can count on four fingers how many times I've been back there.
It's easy to think about how wrong the National Guard was back then........along with then governor, Jim Rhodes and Richard Nixon.
But there was an interesting article in the Washington Post a few weeks back on the young girl in the posted pic - the iconic, Pulitzer Prize winning pic.  She was not a college student, but a 14 year old runaway who happened to be at the wrong place at the wrong time. And the awful things she had to endure due to that picture from pro-military, pro-war, pro-Nixon folks.
The student photographer didn't get treated as bad, but it was no day at the beach for him as well.
I was just surprised at my reaction of disgust I had by reading about people who opposed war opposition.
It is an interesting read - and truly an event to change most everyone's life who experienced it first hand.
Song by: the Shins
Posted by Blobby at 12:07 AM

I worried yesterday as this post wasn’t visible to me for a big part of the day. This is the decade ,but a few years before My brother first, then I, graduated high school . My parents, Ph.Ds in. psychology ,were very busy picking up the pieces of the minds of boys coming back from Vietnam . I remember feeling bad about having, sexual attraction to handsome young men, my parents were counseling for what would now be called PTSD . I remember the Pictures, knew I should be outraged , and then fell back into the hole of trying to survive my early teens. Such a sad time, for those, then came Watergate and impeachment and China and Pandas. All very confusing , so much death so little understanding!