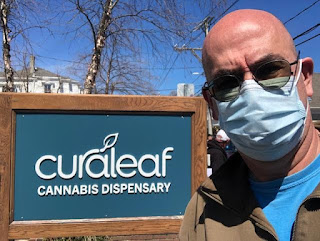 As I was having caffeine with Mike one morning, I kept seeing people passing behind him, going down or coming up a ramp.

On the sidewalk was a man with a clipboard and a walkie-talkie, but I had no idea what was going on.

Mike's noggin' - as petite as it is {snicker} was blocking this entire sign.

Ok ok. His head isn't AS big as the sign, but the whole depth of field thing really did block the wording.

Massachusetts, it seems, is licensed for recreational and medical marijuana. I kind of assumed as I was driving past Lenox and saw t sign for a dispensary, but I was also going about 75 mph, so might not have really caught if it was for medical use or not.

For the next day or so, I toyed with going back. While certainly have smoked pot in the past, it's been a long long while, as I never enjoyed the smell etc.

While in Amsterdam I looked for some edibles, but I felt like a fraud being in there, as I knew nothing. And when we were in San Francisco, we never even made the attempt. It never even crossed my mind

But as the blog title suggests - when in Rome.

After consulting with some traveling companions who had already been in, they gave me the lay of the land and what I needed to do and for which to ask. They bought actual pot - I was going for edibles.

I knew some info about them but not enough either for purchase or for first time use. Yes, I get it is recreational, but I guess I wouldn't take a jet-ski out without learning a thing or two about it. I didn't learn or read enough I think. 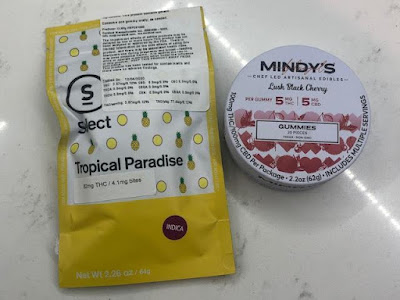 I knew that edibles are fairly unregulated, so you could get a good mellow high or you know, a fucked up trip. I've done enough drugs in my life that this can be said about every illegal (and now legal) substance you ingest or snort up your nose.  If you're using needles, I have no experience with that and cannot compare.

After going to Curaleaf, I opted for the tropical gummies, which were the lower dosage - as again, the fairly unregulated, let's start of safer.  You have your choice of gummies that really mellow you out or ones that keep you more active. I opted for the latter.

A few days later, I stopped in B Well and got the lower dose gummies for the active ingredient.

40 gummies for someone who doesn't do pot seems like a lot - and it is. But I'm not coming back anytime soon probably, right? When in Rome..........again.

It should be noted I did none of these in P-town. I wasn't sure how I'd react and we had limited time there. Also, I was staying on my own, so you know, better safe than sorry.

The first Saturday home I tried the tropical low energy one. Actually, I tried half. Nothing. An hour later, another half. Nothing.  I meant to look up if I were taking them right, but never did

Cut to this last Saturday, an hour before our weekly Zoom call. One full one of the active kind ingested.

90 minutes later or so, I felt good. I had two beers on top of edible. I had snacked a little bit since lunch, but not truly had a meal since. Morty and Becky thought I looked tired on the call. I think that is just me, and not me under the influence, I'm sorry to say.

I went to bed with a little buzz, but nothing big time. It is not a high like smoking - at least that was my experience

The rest of my experience doesn't end well - though I don't think it had a thing to do with the edibles.

The next morning - Sunday - I got up. Sat around for a bit and took Shep out for a walk. Half-way in, I went, "uh-ho". A weight was sitting in my gut. I wasn't sure how it was going to end, but we made the walk and then my GI distress manifested itself in ugly ways.

Then add to that, chills.  Or sweats. Headache. Muscle aches. Skin sensitivity. Really wanting to vomit but not actually happening.

This would last all day long - and then some.

Of course, NOW I do research on this stuff.

It is highly unlikely the edibles produced something out of a Beetlejuice deleted scene.

My neck had been stiff earlier on Saturday, and we did picnic at lunch. Maybe that salad I bought wasn't all it could be?

While I'm sure I will try a gummy again (38 to go!), it just might not anytime soon.

And Now You Know, Either you use them or, Im sure you have the perfect friend to give them to. But I’m like you, I wonder sometimes is this all there is , and more times than not , it is! I don’t find that a bad or sad thing . The greatest things about growing older are respect for hangovers I haven’t suffered from in decades. Somedays getting up is it’s own struggle. And somedays it’s not! I’ll take it!

Hi Blobby,
The regulation of the marijuana industry means that there is a consistency with all products now sold in MASS. They are also tested repeatedly to ensure that no other substances are included and for their potency.

If you're a novice with edibles, the directions my friends have provided who love them (I prefer to light up a joint every now and again) is find the potency that works for you. These aren't like your friend's magic cookies from the 80s where you have half a cookie and are incapacitated for the rest of the day.

Try 5 or 10 grams then move up. The tough thing about edibles is that they have a delayed response time (typically 45 minutes to an hour). Drinking one or two beers should not impact your buzz or high at all unless you are also new to drinking which I doubt. Drinking a six pack or more would.

I suggest you give it a try again - possibly before enjoying a movie.

Thank you for shopping local. Curaleaf is a chain and b/well is locally owned (by my friend, Karen).

e-coli on the salad stuff?

Count me out
There is no regulation and it's a buyer's market and no long term studies.
All the same I have countless testimonials from others 'it works for me" so there it is.

Thank goodness you didn't do a full Maureen Dowd and get terrified by green corduroy.

shouldn't EVERYONE be terrified of green corduroy?