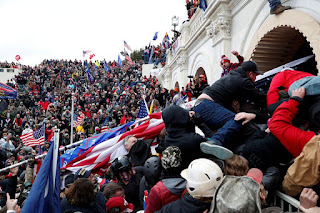 As if Kevin McCarthy weren't already a humongo douchebag, he's doubling down and ante'ing up. And everyone is about to let him.
He's already gotten away with doing away with Liz Cheney. Of course, no one needs a Cheney doing anything, but she's gone due to his changing the narrative on her calling out BLOTUS for being a dick and inciting an insurrection.  Something he did. Something that is video and audio recorded.
But poof - just like that, he didn't do it and Cheney is to take the fall.
Here's where he's upping the ante:
McCarthy is leading the charge for Republicans to downplay (read: negate) that there even was an insurrection.
And some asshole GOPer (though it might be McCarthy also, likened January 6th to - and I quote - "a normal tourist visit".
What the Actual F.
What kills me is they're going to get away with it.  Some of the GOP is already refuses to support a commission on the Jan 6th uprising. The commission hasn't even taken place yet, let alone any results.
I bet he'd support it if he knew it was in his favour.
Of course, as always where is the Democratic leadership?  NOWHERE to be seen or heard.
In theory, I know we have the House and Senate, yet all we hear from is McCarthy and McConnell.  Why won't our own parties fucktards stand up and be noticed?
I don't know how to keep the insurrection to not sink under the waves and treated like nothing. If anything, it was a test run. The next version isn't going to be as good.
Mark. My. Words.
Song by: Pat Metheny Group
Posted by Blobby at 12:07 AM

the "normal tourist visit" guy was andrew clyde of GA.

and there are NO tourist visits due to COVID.

IT WAS AN INSURRECTION!

Then let the Democrats and those lone Republicans with a spine create their own commission and investigate.
Find out that Kevin McCarthy is a fucking traitor.

How about we begin indicting and sentencing the over 400 seitionists arrested by the FBI . Once they are tried and convicted with ample sentences this will stop. This I really don’t think requires a 911 commission. I also believe there was no need for a Second impeachment. We know what the evil is and he needs to be charged convicted and jailed, or rendered politically impotent and the story ends. Nancy wants to do everything, which I respect her for. But when you increase your investigations , you dilute your power. IMHO!

Seditionists. I used spell check once.