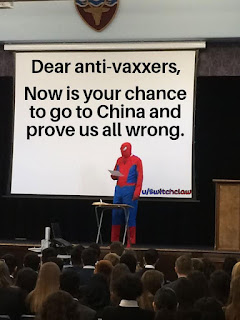 I honestly don't know where to start with this - or end with it.

I think we can all agree, putting Mike Pence in charge of anything, let alone something that requires actual science has just fucked with the entire actuarial industry.

The fuckuppery of putting him in charge of say, well, anything, baffles the mind. I can only assume it's to keep him "busy" while more evil is afoot elsewhere.

Naturally, the potential fuck-ups don't just stop with Lady Pence, though some involve him an d BLOTUS.

Or lack of. Any and all {allegedly} news and reports of a DEADLY PANDEMIC have to be run through their office to see what, if anything, gets released.....and in what form.  And we are talking from HHS, CDC and most likely the NIH too.

Because, you know, knowledge and science never helped anyone avoid catastrophes..........and death!

Oh, and the CDC put out this. 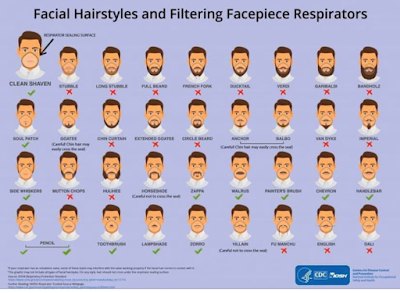 I am torn. Surviving or shaving my beard?  At first I thought I'd just let the COVID-19 take me down, but then I thought someone has to stay and take care of Shep and Sophie. So, there is a possibility that you'll see me beardless.

However, the other communication is: masks don't work.  See? This kind of plays right into my - if the health powers that be cannot be transparent, we are just fucked.

I can't say I was sure when I was going to retire, but the last few years, we've been talking about it more and narrowing things down, like dates and possible locations. I can tell you right now, the hit our retirement fund has taken in the last week has been HUGE. This could set us back five years. I'm guessing it will take 10 to fully recover from this drop.

Three of the worst drops in the Dow Jones in history happened last week. And all are on BLOTUS' watch.  .....hence the 'this is a hoax' tagline some of the GOP is trying to sell. Yes, the insensitive GOP who are actually minimizing thousands of deaths across Asia.

My only positive takeaway from this is the stock market seems to be BLOTUS' big "claim to fame" and well......'on his watch' keeps coming back. Another reason for GOP to sell 'hoax'.  Maybe this foible can ride the wave until November.

Let's talk minimum wage workers, shall we?  The ones who usually stock, ring up, make or serve our food specifically.

Forget that they probably have no healthcare coverage of which to speak. Paying to get tested is probably off the table. Being quarantined for three weeks without being able to work is financially devastating. So, what are the chances they do work because they have to?  The Plague comes to mind.

Speaking of............there are cities in Asia that are completely quarantined. I know this as much from a friend as I did from reading news.

My friend asked if I'd be emergency contact for him and his husband, should there be separation and inability to get ahold of each other.  Of course, I said yes. At first I thought it an overreaction and a bit extreme, but I'm not so sure. He's also stockpiling food and water, as he has seen empty shelves over in China.

Oddly the same evening that my friend asked me this, 710 came home saying after listening to news reports, this might be way worse than we anticipated. So perhaps I'm the one with my head in the sand a little bit.


Our hospital has multiple policies now in place depending on where and how patients present themselves While I miss working at the large health center / hospital, these days I am happier being at the management center which has no clinical exposure.

I will say, I am loving Dan Rather and his Twitter-feed. Whether he should have been let go by CBS years ago is debatable, but now that he's not bound by network rules, he's been pretty fucking awesome. 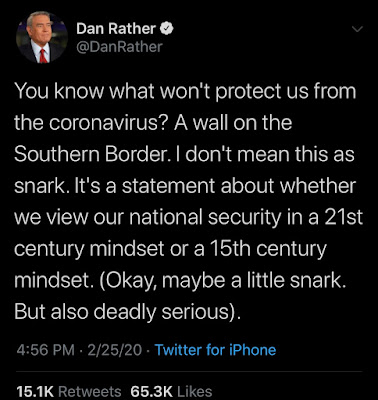 .....and the New Yorker KILLED it with their cover this last week. 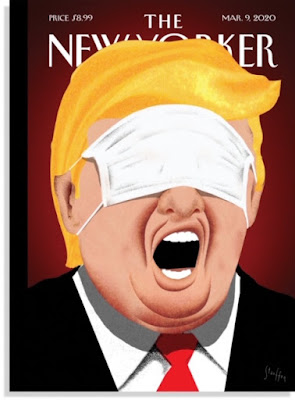 reminds me of the kevin bacon scene in "animal house": "don't panic, all is well!" this is the position of the whites-only house.

the New Yorker cover is marvelous.