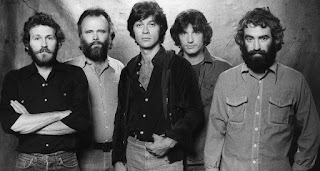 It has been over a month since we've seen a movie. As predicted, the pickings have been slim - and I'm being nice.

I can't say I was jonesing to see Once Were Brothers (which is admittedly a difficult title to say), Robbie Robertson's tale of the Band.

The last part of that last sentence is crucial. It is one man's take. Three are dead and Garth Hudson, who is still alive, didn't participate or wasn't asked to, so I'm pretty sure we're getting partial history.

I think most things in the movie are undeniable, most notably the formation, the music and the importance of the Band.

the Band was THE band that Bob Dylan used when he went electric, which by all accounts - Dylan's included - was just a horrible reception by the fans to his move. Still the five were a tight, both in playing and in friendship.  ......until they weren't.

The five guys really were creating music, that at the time, didn't exist. You could now call it roots rock and roll or Americana, but in 1968 it had no designation. They music was both tightly played and yet loose at the same time. Their skills were phenomenal.

Oddly, I've never seen their 1976 film the Last Waltz, documenting their final performance (Martin Scorsese directed), but I'd like to at some point.

Robertson's take was that they'd take time after that to chase their dreams and get their life together before getting back to making music with each other. His recollection was that everyone forgot to come back - which really is the fallacy. The Band did reform in various iterations, the only one not participating was Robertson himself.

Still, the Band had its admirers, Clapton amongst them, who traveled to Woodstock NY to ask if he could be in the band, but was turned down. But you see and hear from Dylan (archived footage), Springsteen and Van Morrison, as well as Scorsese, David Geffen and Jann Wenner.

Again, the right questions never asked. Geffen, by all accounts was after Dylan to sign him, and used Robertson to be the contact. While mentioning signing Dylan, you never got a sense that they did anything with the Band or Robertson, but it was important to Robbie to have it in there to solidify our knowledge on how close he and Dylan were.

It was a decent film, if not a little lopsided in truth. I like Robertson generally - including his solo work.

Like Linda Ronstadt's film last year, it was based / inspired on her memoir. Once Were Brothers was based on Robertson's memoir, which I didn't even know existed. Still for the money, David Crosby's was by far still the best of the bunch.


Song by: Robbie Robertson
Posted by Blobby at 12:07 AM

Can't see me making the effort to catch this - though I DID see 'The Last Walt' in a cinema way back in 1979, and now recalling sweet F.A. about it. Brothers, pass me by if you will. (Ho-hum!)