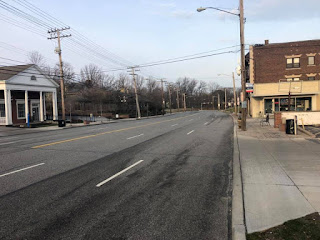 As for 23:59 yesterday (just 8 minutes after publishing time), Ohio is on Shelter in Place.  Like New York and Illinois (if not others as well), all are to stay home, save non-essential businesses.

What is deemed "non-essential" is iffy at best. Healthcare and infrastructure I get. Well, healthcare, as long as it is not abortion-related. Ohio has demanded the stoppage of abortions during this time. It's an asshole-ish move, but one I doubt will be challenged, except when this ends. I will be a dollar, that Ohio asks for that demand to be carried forward.

Tattoo parlors and our doggie daycare are non-essential. Shouldn't I balk at that first one?  If the second amendment remains in place for this, why not the first?  Can I not argue that getting inked falls under freedom of expression?

710 and I have, for all intents and purposes, been practicing this the last week. We go out with the dog, for walks, but distance ourselves from others, which isn't difficult. First, on the best days, few people hike. Currently, things are like a ghost town.

The title image is a major road into town. This was taken at 07:50 on a workday. Not a car to be seen in either direction. Normally, the downhill routes into the city would be jam-packed.

While this is challenging for those with kids, etc, it hardly impossible. I am glad my mother isn't still around for this. Besides her respiratory challenges, just not having visitors for weeks on end would have been spirit crushing for her.

Who I truly feel for are the homeless. Shelters are not shelter in place. They're being encouraged to find other places to stay !!!!   Thank about THAT for a moment, if you will.  And with restaurants, Starbucks, bars, parks, etc being closed down, so are their restroom facilities. The homeless have literally nowhere to go. Or to go.

I love that Wilmington, DE has put out a number of port-a-potties for this reason. So far, no town in Ohio has done the same - at least of which I know. I think think that is essential, and humanitarian.

But this whole thing has not been humanitarian driven.

Post 9/11, even if for a few weeks, had the country coming together. COVID-19? Not so much. It is every man for him / her self. It's quite sickening to see. I'd say it's a leadership style - and in a way it is. Bush was hardly a competent president, but he kind of held it together in the time after 9/11 (you know, before the made up evidence to go to war shit). Current leadership is fucking off. the. rails.

If not every man for himself, definitely every state for themselves. "He" has said as much. That is delegating, not leading. He is weak and he knows it.

The next phase is going to be the worst and possibly the end for us all - and that's not just hyperbole: it will be a national lockdown, even though BLOTUS says it will never come to that (run through the translator: coming in a week or less).  But the talk of the DOJ suspending certain constitutional rights (did they start that Jan 20 2017??), including habeas corpus. This would mean, YOU could be arrested and held indefinitely - no court appearance, no trial, no nothing.

Should they get this through, it will be like Delores Umbridge at Hogwarts, not so slowly stripping away right after right until there are none. The end one being: no November election.

You know I always say I'm a fatalist, and not a pessimist?  This is fatal.