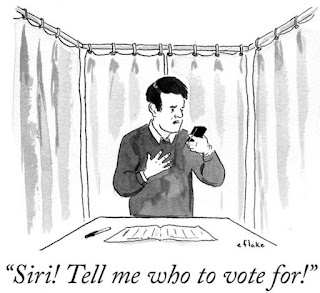 This cartoon was funnier - and more relevant - four weeks ago when I snagged it.

I'm not quite laughing or smiling now.

March. Ohio is like the fourth primary, and for all intents and purposes, THE candidate has already been established, in essence leaving voting for any other person meaningless.

While I get the COVID-19 response in Louisiana by delaying their primary by two months, if I think we don't have a choice, those backwoods folk really don't - except for their local stuff.

At this point, they haven't opted to move the election, and they might not be able to as, early voting and absentee voting has been going on for some time.  Oh - and for the democratic presidential stuff, it doesn't seem to matter.

Our ballot was interesting, based on who was and was not on it. Andrew Yang had not dropped out long before I received mine, but maybe he didn't have enough signatures to make it on. Bloomberg was and he had only recently come on board by the time those were printed.  Booker was till on there. ....and of course, Tulsi - who is amazingly still IN the race, though I don't think she has a dime for campaigning, but enough umphf to get people to sign-up to get on the ballot.

Since it seems it will be Uncle Joe as the DNC hand-selected septuagenarian, I had no issues not voting for him and voting with my conscience.

You can all calm the fuck down, I'll vote for him in the general election - but not for him. I won't even vote the bottom of the ticket at that point. I'm voting for the next four years of Supreme Court selections. I'm voting for kids in cages. I'm voting for education, the climate and science in genera. I'm voting for fucking human decency - though we will never fully get back to where we (thought we) were in my lifetime.

Perhaps it's not a bad decision to vote your conscience too in the primaries. Let Joe or Bernie know while they might be the nominee, there were others in the race who had valid points of view and that they are not a slam-dunk. Both of them need to be more inclusive - and they are just not.

I have not qualms about voting for Joe. I think he has the best chance to win against Trump and that is all that matters. He represents stability that we sorely need now.

Maria said...
This comment has been removed by a blog administrator.
5:48 AM EDT