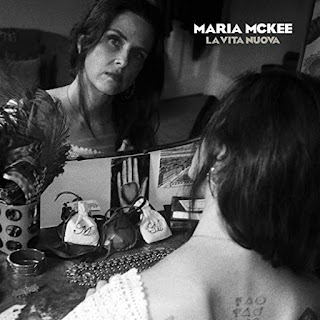 That is kind of my one word review for La Vita Nuova, the new disk by Maria McKee.(don't bother clicking, the site hasn't been updated since 2015!).

I'll assume the 'new life' of which the title speaks is McKee's semi-new revelation of her pansexual-ness, or just coming out, depending on who / what you read.

The reality is, save for a song here or there, McKee hasn't put out a full disk since 2007. Granted, her 2005 disk, Peddling Dreams was spotty at best, but I alway have high hopes for Maria, and always have since 1985.  Her Life is Sweet disk ranks as one of my top of all time.

Even in 2016 she put out a song on some compilation that was very good - a missed presence.

I'm not quite missing her with Nuova.

For the most part, it's McKee and either a guitar, piano or strings. Rarely are there multiple instruments. Even more rare is any rhythm section. In theory this could all actually work, but it doesn't.

In a way, the songs are promises unfulfilled - not by theme, just by fleshing out. McKee's voice is still fine, but I think the disconnect is in her songwriting - or with me.

To a degree, a percentage of McKee's songs are not your normal song structure. Verses don't have to rhyme, the chord progression might not continue throughout the entire song. Maybe all that was accentuated by fuller arrangements?  On Nuova, it just seems that McKee is just short of stream of consciousness / singing.

I've made it through the disk 2-3 x in the last week, but it's been a struggle. Few were more excited than I when I hard this was on the way. Maybe I'm one of the few who are let down, or maybe I'm in the majority.

I'm glad McKee is back to making music, hopefully this is just a one-off on iffy songs.
Posted by Blobby at 12:07 AM