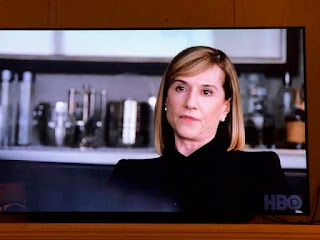 We have discussed and even had faux attempts and ditching the cable and dvr box, but at end of last year we started to put things into action.

I should back up - our TV was 14 years old. Smart TVs did not exist then, so we're working with 2005 technology. j

The idea was to upgrade the television first - and we did, as you can see above. A big ass screen, at that. Honestly, it's not that much bigger than our last one, except now we have no borders.....it's ALL screen. That is a lot of space to see Camille Grammar throw a hissy on the Real Housewives of Beverly Hills!

So, with part 1 done and me being at ease with using all our streaming shit, we kind of dicked around in actually cutting the cable part.  ......and then Spectrum made it easy.  They opted to raise our rate. Usually you see a $10, maybe $20 increment happen. Nope.....they went balls to the wall with $100.  Per month.  Increase.

Honestly, the lady at customer service didn't try too hard to keep us or give the hard sell. Lolita (I'm not even making that up.....though she might have been), was pretty respectful for one of these reps.

Oh, and we have YouTube TV. My sister likes it and let's face it, that woman is hard to please. So far, it seems ok, though I'm still learning. AND we can have six users, so 710's sister in North Carolina is ditching her cable and coming onto our service.

The only thing I know we have to do is set up HBOGo or something. I think we can get it without cable. While new Succession episodes aren't one, we were right in the middle of the New Pope, which has been way better than last year's the Young Pope...........and not to be confused with the Two Popes.

I'm glad Spectrum got severed. They were actually worse than Time-Warner.......and that is saying something.

$100 a month increase is bad. I don't blame you for getting rid of cable TV. Do you still have to by Internet from Spectrum? Are you also able to use an over-the-air antenna to get free local channels? I get zero over-the-air reception, so that's not an option for me. Do you use any other streaming services?

So yes, we don't HAVE to get spectrum's internet, but nothing else is nearly as fast, so.......we are pseuo stuck with that. And a simple antenna brings us local things, so it's not all bad. We currently have only Netflix, but I assume that might change in the near future.