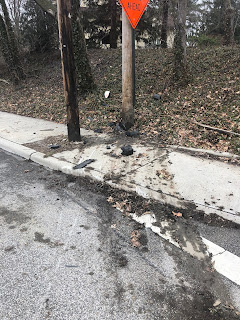 It was just 10 days ago I posted about another crash (or was it two?) that came into the yard.

Another one happened a few days back. This time, I heard it. No screeching tires, no horns, just the crash, the crumple. Oddly, 710 didn't wake up, and while Shep had gotten up with me, he didn't bark. I fear we have inadvertently trained him to recognize crashes and run to the window nearest to the accident.

So at 04:40 the other day, we went for our walk to see the cops already there, which was amazing. From the time I heard the crash, to putting on clothes (and peeing) and getting outside, I'm surprised anyone was there - including the driver!.

We walked to the corner, the cop was out, driver was out and walking around, though rubbing his head. I was unsure if it was due to injury or to 'what the fuck did I just do?' .  Possibly both.

Technically, he barely got into the yard. As so many before him, Mr. Telephone Pole stopped him dead in his tracks. Well, stopped the car dead. You can't see but both front tires and axel were shot, but that probably happened coming over the cement island, before the street, before the sidewalk, before the pole. 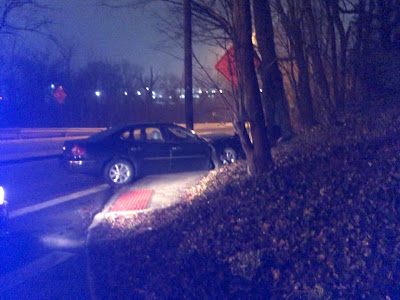 I snapped the above pic and Shep and I skidaddled as the firetruck and ambulance arrived. While it'd be nice to see the would be (but never are) hot workers, my bigger concern would be the dog parking at them aggressively. It was a lot to take in.

But we did a short walk. Clearly, their services were not needed, as when circled back a few minutes later, only the cop and victim remained.

Naturally, I was annoyed later in the day to see they picked up none of the debris - again. So, I took care of it myself. 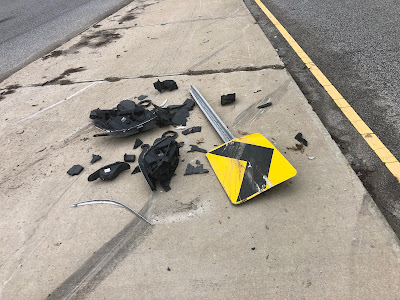 I took it out of the yard, and deposited all this on the aforementioned island. Three days later, there it all sits. With each crash, I will just add to the pile. Maybe it will be a stark warning to the drivers.

Whilst speaking with neighbors yesterday, one of them mentioned the horrific accident outside our house a week or two ago. "Horrific" is relative, of course, but clearly it turns out it was one that happened while we were still working at, well, work.

A cement truck came around the corner, lost control, tipped over, and landed on a mini-van, crushing and killing the mini-van driver.

Sure, THAT debris, they picked up!

Yes, I'm being glib. I have no idea who is tracking the volume of accidents here, if anyone. I'm sure that's due to three different jurisdictions responding to (or not) the accidents.

What was just majorly annoying is now just deadly.

Song by: Jennifer Paige
Posted by Blobby at 12:07 AM

Someone's got to do something, and quickly before there's a bigger scale tragedy. Won't be solved by a "Too bad" shrug of the shoulders!

Glad someone took care of the major clean up. I learned a long time ago, I have more time than fenders or lives, slow down life moves to fast. Take care,