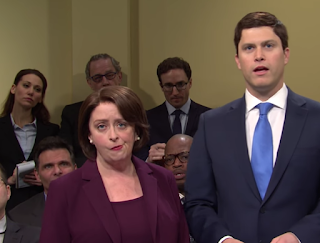 On Saturday Night Live's cold-open this last, well, actually, Friday, "Pete Butt Edge Edge" says he's a candidate for the presidency "for the next three days".

His character was optimistic by a full day and a half.

Honestly, I wasn't sure about Mayor Pete, or if he'd be my pick in the Ohio primary. Now I don't have to worry about that. Nor Amy Klobuchar.

Sunday evening I stepped out of room to get laundry, I walk back in to 710 pointing at the tv to see Buttigieg's bow-out speech. I was truly impressed by his oration and thought we lost someone who could actually put a sentence together. And this time I'm not completely poking fun at BLOTUS (though he's in the mix). Biden and Sanders still talk in sound bytes. While clearly I'll take either of them over you-know-who, the thought of listening to Sanders for 4-8 years seems painful to me.

So, 710 and picked apart why would you drop out of the race with less than two days before Super Tuesday? You're second, possibly third, in delegates and you're coming up on 13 states (plus American Samoa). And you bail?

I don't know what your cash-on-hand situation is, but you gotta figure you're on each of those frickin' ballots, ride out the fucking 48 hours. Those pricey ads have never ever ever made me vote for anyone. You coulda saved the dough.

Like with 2016, the DNC had a plan, and they were not about to let voter opinion matter.

It is their way or the highway, and Pete and Amy just got on the on-ramp to the express lane out of town. Sanders was on track in '16 to make it messy, but Wasserman-Schultz made sure that didn't happen. Tom Perez seems like he wants another old white man running, and it ain't Sanders.

So, my belief is that the two midwest moderates were forced out to throw Biden their votes, voters and delegates. And that sucks. If Uncle Joe can't bring those voters to the table on his own, well too fucking bad for him.

And I don't know what this does for Warren. She doesn't have Bloomberg money. He can stay in the race all he wants. DNC can't tell him what to do. They can try, but that's it. She might be asked to leave, but I'm thinking she might tell them to stick it.

One reason the DNC wants Joe? He's a democrat. Bloomberg - back and forth. Warren - she is now, but wasn't in the past. Technically Sanders is still and independent senator running on a dem ticket for the big office. The DNC no likee that.

So this is now really leaving me in a quandary as I need to fill out my ballot for Ohio's primary.

I'm not saying I'm voting for Warren, but I'm not sure she'll be around in two weeks. And if either of these old white men want my vote, guess what - you'd better give me your VP ticket now, because honestly, that's what it's coming down to.

While I could say "I'm no fool.....", I have very little to back that up, but I know they're not revealing their VP choice this early.........though they should, because right now I'm not looking at the top of the ticket. We've got three old white men and a virus that is killing off people just like them.

You'd better have a good back-up.  A great one, in fact.


So, I am supremely upset and disenfranchised by the DNC. Again.

There is nothing I can see where they've gained my trust or support. Should BLOTUS win {again}, it is on them, just like it was in 2016.  They don't understand that the best candidate might actually be the one that wins, but they're just looking at who they think could beat BLOTUS.........and that hasn't worked out so well.


(and on another note, the DNC fucked up my entire week of posts. I had the entire next 5-6 days drafted and scheduled for publishing. Now I have to rejigger everything, because this one needed to go in today!)

it's hard to believe that our choices this time are 2 tired old men...but I sure as hell ain't wasting my vote on the orange dumpster!

So who elects (or, if necessary, unseats) the DNC? This foreigner has some trouble understanding how your parties work in relation to supporters or members, outside primaries for choosing candidates.

I'm voting for Warren today. I don't think she will get the nomination but I am hoping she gets enough delegates to make the convention a bit messy!

Yep the DNC is getting ready to shaft Bernie again!

Autolycus - you raise a good question one I'm not 100% sure of. There is a chairperson, but I don't know they make the 'rules' per se. I thought we'd have change when Howard Dean became the chair years back, but he tanked. I'm not sure there is a fair system here, even with a massive shake up.