How is it possible I haven't had a Shopping segment in five months?  But I went back and checked....and I haven't. 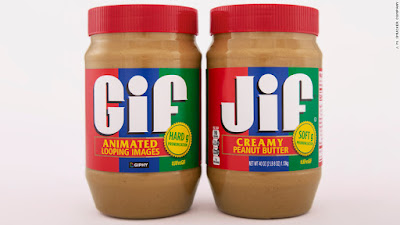 I'm loving it when brands poke fun at themselves.....or others. With social media, it's happening more and more, yet not enough.

Before meeting 710, when it came to peanut butter, I was firmly in the Peter Pan court. I was brand loyal. .....and with Alan Sues as their 'spokesman', why wouldn't I stick with them.

But moving to Columbus, it was harder to find Peter Pan in anything but a small container And then after moving in with 710, I come to the realization that he is a Jif guy.  The HORROR!!!!

Still the limited time only Jif / Gif campaign is a good one. Maybe not enough to get people to buy peanut butter, but it's great for brand recognition.

I was a Skippy kid. As an adult I moved to Adam's which, if you don't already know, is just ground peanuts. Nothing else. Now, in France, I can't get Adam's, and I no longer have a taste for Skippy. We can find some decent peanut butter in the Asian stores, though.

I grew up with skippy crunchy. now I buy a crunchy peanut butter with only 3 ingredients: peanuts, cane sugar, salt. it's a local store brand.

Are you in Central Ohio, now?