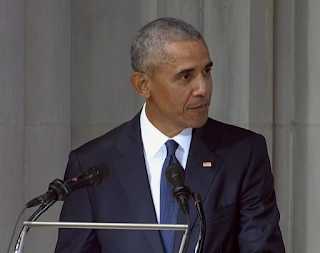 As you have no doubt read earlier, I'm not a huge fan of John McCain. Yet, I ended up watching the funeral, mostly because 710 had it on. And you never know - the pall bearers might trip and the body might pop out of the casket.

Man - the service was way too long with way too many speakers or folks who had 13 second bible quotes to read, but took a minute and 43 seconds to walk up there and the same amount of time for the dismount.

The audience was a collective who's who of DC - past and present.  The usual suspects - three of the five ex-presidents, at least three ex-vice presidents. A butt load of senators - former and current - including Dole, Snow, Warren, Kasich, Lieberman, and McCain's "best friend in the Senate", Miss Lindsey Graham.  Oh, and Warren Beatty - naturally!

Poor Linds only got one of those 13 second bible versus. He seemingly had what looked like a name tag pinned on his suit that probably said Night Manager - HoJos: Lindsey.

I don't feel for Ms. Graham. He now parrots everything BLOTUS says. When the 2016 campaign was going on, he was quite vocal about many things, being anti-BLOTUS. Except he never quite went to bat for McCain (his "friend") when BLOTUS mocked him.  Fair weather, it seems.

Glioblastoma is fatal about 99.7% of the time. During the two year diagnosis / treatment time, how does a family not come to grips with this early on and work through the process?  They seem well educated and have the means to medical care that would give them the 4-1-1.  Even an internet search would provide that (thanks Al Gore!).

But you had Megan (?) up there teeter-tottering on being fierce or out and out blubbering. I was waiting for at least one of her fake eyelashes to come off.  I know I'm being petty. I just think her words (or whomever wrote them), were lost a bit with tears.

"We gather here to mourn the passing of American greatness, the real thing, not cheap rhetoric from men who will never come near the sacrifice he gave so willingly, nor the opportunistic appropriation of those who live lives of comfort and privilege while he suffered and served,"

And she made the comment on "America has always been great".  But why-oh-why were the hundreds of tv cameras not focused on Jared and Ivanka at that very moment???

I would have paid big $$$ to see their stupefied reaction.    .....and it was Saturday, so why wasn't Jared in Temple?  And better yet, why was he there at all?  Or his skanky wife?

Kissinger spoke (I know, right?). He mentioned how McCain barely ever talked about his POW days. No shit. He didn't have to. Everyone did it for him. Lord knows every single person did yesterday. You'd think he did nothing else in his life.  I loved how someone mentioned how it didn't define him - by defining him by the very fact.

Shrub talked too. It's amazing. Compared to the current president, in my walnut sized brain, I kind of thought he might not be so bad. But he is. The second I had to hear that voice, I cringed. And yes, by comparison, of course he seems "ok" - but then you think of all the horrible horrible things he did in office - and seeing Cheney in that front row made it all too real.  I listened to him speak and yet never heard to a word.

Then it was Obama's turn. He's everything Shrub and BLOTUS are not when it comes to oration. There are times when Obama plays it too cool, but it was a funeral, so I'm hoping others heard his words.  They were great if not at a very even cadence:

“So much of our politics, our public life, our public discourse can seem small and mean and petty, trafficking in bombast and insult and phony controversies and manufactured outrage. It’s a politics that pretends to be brave and tough but in fact is born in fear."

Blobby hasn't listened to the commentary afterwards. I'm not sure I need to. Chuck Todd, the chinless wonder,  and his prattling during the event was more than enough.

Song by: Depeche Mode
Posted by Blobby at 12:07 AM

I watched some of it, too, because Ken had it on. I saw Kissenger (the nerve of that man) and Shrub (I thought his speech was decent, but his delivery, with that smirk, just ruined it for me. He seemed to be proud of himself for pronouncing things correctly. Good thing there was no call for "nukuler"). And Obama (overall very good, but at one point I thought he got a little preachy). I missed Meghan McCain, and I left the room when Miss Graham read her bible verse. I still think people are building McCain up too much. He was a conservative republican and, with a few exceptions, enabled their crap. And he gave us Sarah Palin. /rant.

didn't watch, looked at excerpts. I wish obama were back in the white house.

Miss Lindsey can kiss my ass, and the collective asses of South Carolina, when she's done riming ______.

"And the lonely voice of youth cries what is truth?" Vintage Johnny Cash. Apropos? I don't know. I just like the song.

this was good reading; you write well.