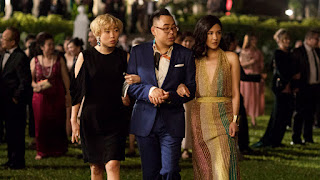 Sunday evening, we took in the newest version of My Big Fat Greek Wedding.

Just swap out 'Greek' for 'Chinese'.

Yes, it seems that Crazy Rich Asians is the big summer hit.  Take that, Solo.

While I do want to see the new Nazi hunter movie with Oscar Isaac, he'll have to wait a week or two.

Crazy is fine for light fare. I don't know if get lots of critical praise (though Rotten Tomatoes says 93%), but I'd be there hasn't been a movie in 2018 that was #1 for three straight weeks.  Take that, Solo.

While the film has some very over the top moments, it has some heart too, mostly due to Constance Wu's performance.  There were other enjoyable performances as well - mostly the comic foils that are the gay/ stylist Asian and the female character's BFF.

Not surprisingly, I took issue with some of the story.

Yes, everyone in the movie is Asian. Some more Americanized than others. The main dude, Nick, looks more like he'd be a member of the Sharks, as he looks more Puerto Rican than Asian....and has a British accent.

I can understand not telling your girlfriend you're extremely wealthy - at first. But travel halfway across the globe to meet your boyfriend's family / go to a wedding and you don't prepare her for it? Or at family party and wedding, and you don't escort your girlfriend to either event and let her get herself there on her own?   Bullshit.

Or your "friends" gut a fish in/on her bed and write horrible things in her room about her and the bf basically shrugs and say says, "eh.....whatta gonna do?"

In the end, I never felt that the major conflict of the movie was ever truly resolved.

Of course, this isn't a movie where one is supposed to think, let alone over think. But I am who I am.  All in all it was fine. It might be a blockbuster in terms of cash, but it is not going into the annals of one of the top 1000 best films of all time.  Take that, Solo.   Wait.  I'm not sure that works here.

Oh, and somewhere, you gotta believe that Lucy Liu, Jackie Chan, Margaret Cho, Ken Wantanabe and the maid/geisha who worked for Mr. Eddie's Father, have to feel the sting of being the only Hollywood Asians not in this movie.

Yeah, I'll be watching this one when it eventually comes on HBO or Netflix.