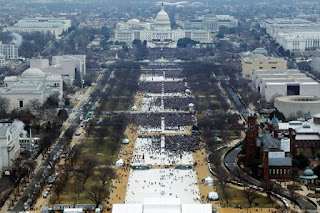 Of course there were blatant fibs during the campaign, but I'm talking post-inaugural ones. Key word: 'inaugural'.

No surprise to anyone, who isn't a toothless, torch-bearing MAGA-er, the inaugural photos were doctored..............and ordered so by Mr. Insecure himself.

Because being president isn't all consuming with its regular job description, BLOTUS himself called the acting head of the National Park Service, and then Sean Spicer.  When they couldn't get more "flattering" photos of the crowds, they did what any normal, sane person would do:  faked it.

They had NPS doctor the photos by cropping out empty spaces, making the areas look more populated than they were.

I cannot for the life of me fathom shallowness and pettiness that can come from going that far to put out something so fake. I mean, it's not a Real Housewives show. That I get.

So BLOTUS requested it. Spicer lied about it. Nobody bought it anyways. I'd almost get it if someone else had ordered it and showed BLOTUS the fake and passed it off as real, but he knew it wasn't.

Is this a case of:  if you tell a lie enough people will believe it?  Including the lair himself?

The real kicker?  The lie meant nothing. But it was a litmus test to see what the public would / could endure. ....and it was only Day 2.  He's kicked it up several notches since then - on a daily basis. He has acclimatized us to his deceit. We have so slowly gotten used to it, while he's ramped up the frequency and severity, I'm not sure we find them as offensive as we once would have.

LOCK THEM ALL UP!

I hope eventually the lie/s get to the point it all implodes quickly like a hot air balloon. It frustrates me it seems never to occur.