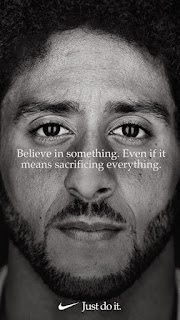 Oh yes. I just said that.

I said the majority of what I wanted to say regarding the matter over two years ago (!), except for the fact that I haven't.

The stuff about why not to stand still....well.....stands. But the reasons for kneeling - the protest and the why behind it is even more important than before.

Since - oh, let's say - Charlottesville, you've seen, on average a weekly basis, videos of people of colour being harassed and / or arrested by cops for opening their own store, working on their own car, keying into their own house, etc.

You've seen video of people of colour having the cops called on them for using coupons, barbecuing, selling water, using a study hall where they go to college, using a pool where they live, etc.

You get the idea.

Black people are being reported for being black.

That is why Colin & Co kneels.

So, yes, what Nike is doing is risky, but important.  If these folks who are boycotting the company because they support Kaepernick are so upset that they're cutting up and burning their Nike gear, where was their outrage at the abuse of child labor?

Oh that's right.  They only care about in-utero.  What was I thinking?

Still, I like Nike's message:  Believe in Something. Even if it Means Sacrificing Everything.


Say what you will about Nike (though I think I've only owned one shirt by them), while the 49ers dropped Kaepernick and he was virtually black-balled by the NFL, Nike never dropped him as a spokesperson. Sure, they didn't use him - until now - but they didn't abandon him either.

I don't know the number of pro this campaign vs anti.  I'm guessing Nike does, or they wouldn't have done it. I hope the pro wins. I hope it is a precursor for November 2018.  I mean, I'm voting, but I'm still not buying anything Nike.

Song by: Nellie Furtado
Posted by Blobby at 12:09 AM

you nailed it! now I have never owned anything nike.

and the stupid fucks that are cutting/burning their nike items have already given nike their $$. just like the keurig and yeti smashers. and nike is laughing all the way to the bank over these stupid fucks.

Well said, those that get their knickers in a knot, miss the point of his taking a stand, by not standing. In a way, it feels like 1968 all over again.

Back in my running and triathlon years, I wore Nike almost exclusively. Very good quality. Just buy it.

Great post Blobby. I agree with the points you made as well.