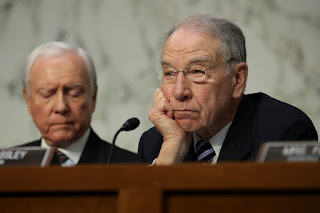 This poses a problem. More for the anti-Kavanaugh clan than the pro side. These are all late-comers {allegedly}. All there has to be is a partial untruth from one of them to derail the entire credibility from any of the others.  The last thing this thing news is any fake news.

Speaking of late comers - what the fuck with Dianne Feinstein??

She knew about Blasey Ford.........in JUNE!  And she waits until after the confirmation hearings to say anything.  Ya know, this 4-1-1 would have been helpful TWO MONTHS AGO!

She as big of a stupid fuck as Miss Lindsey Graham. 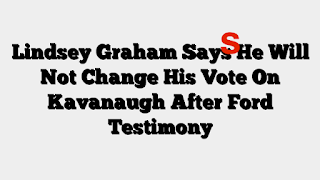 Yeah - that sounds like it will be a fair and necessary hearing.

If there were video Linds would take his recess break to stroke one out in the little senator's room, but only because he might have seen man-parts in said video.

Most, if not all, on this all white old male committee members have said as much the same. Clearly they are going through the motions. They're gonna push this through, just like that baby they're gonna force you to have, ladies.

I appreciate the internet pulling at the thread of why aren't the GOP as incensed by allegations against Kavanaugh as they were about Al Franken, but Senators and Representatives don't have to answer intenet memes.  Still, why isn't anyone asking them face-to-face?

Ohhhhhh.....that's right. FOX. The only true network they dare go on. Chuck Todd is too much a pussy to ask and hold them to an answer.  Ditto with the holding out on Obama's nomination, but rushing this one through.

My stomach is in knots.

I emailed Miss Lindsey since she's, sadly, my Senator, asked her if she'd feel the same if it was her sister reporting an assault 35 years later.
Would she side with her own sister's accuser?
That said, Miss Lindsey can fuck off.