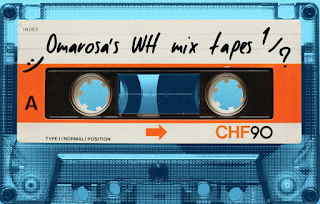 All-in-all this has not been the best two weeks for BLOTUS. His administration seems a bit, oh, put upon.

Rumour has it that the White House has again changed cell phone policy. All cellphones must be left in lockers before going into the West Wing, even if it's a WH-issued phone.  Before it was just the personal phones. Now it's anything that can record.

Seriously. It's her fault.  Her and her taping private conversations.

She released another tape yesterday. BLOTUS, Sarah Fuckabee Sanders, and other aides laughing in the Oval Office about terrorists after four U.S. servicemen were killed in Niger.

I don't care the scenario or the probable excuse of "lightening the moment". It's vile and vulgar just like those in the room.

I remember when four U.S. folks were killed on Obama's watch...........in Benghazi. No one laughed. Not in the Oval, or at the 113 investigations they had to that situation.  I haven't heard anyone question this administration over those four deaths - not that BLOTUS met the bodies at Dover. I mean, I don't think there was a golf course close by.

While I think nothing of Omarosa, I'm ok with her releasing this shit so she can sell a few more books. Well, I don't care about the commerce part, but I like the peeling back the curtain on this asshole.

I will say this - if there is a military man who voted for BLOTUS who hears shit like this and still supports him - well fuck them.  I do not want to hear a word from anyone about "respecting the flag or troops".

I would like to thnkx for the efforts you have put in writing this website. I’m hoping the same high-grade website post from you in the upcoming as well. In fact your creative writing abilities has inspired me to get my own web site now. Actually the blogging is spreading its wings fast. Your write up is a great example of it.
pop up sales
recent sales notification popup