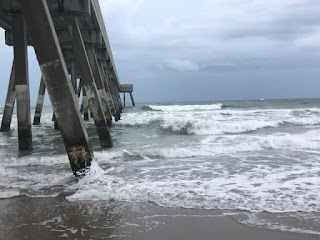 It looks like Florence, and not her machine, is gonna make landfall later this week.

....and it looks like it's going to hit dead center of where we took our summer holiday this last July.

That is the problem with beachfront living, but it might be worth the risk.

I think the place we stayed could withstand a lot. It seemed solidly built, but oddly with no storm shutters. Maybe there was plywood in the pass through on the lowest level.

Being selfish, I hope any damage will be minimal, as we are probably returning next year as well.

The beach is wide and with a nice deep drop off to the ocean that might protect things.......for a while, but not at 140 mph, I'm guessing.

There isn't tons in "downtown", but I'd hate to see anything get damaged. It's all independent everything - not a chain store to be had.

Further inland, my sister-in-law and her daughter & son-in-law are hunkering down for the hit as well. They've stockpiled food and such and are expecting power outages. We'll be in contact as the storm approaches and then hits.

I have to love our government's pre-involvement:

The EPA!  Worried that the storm might hit nine sites that contain toxic chemicals and they'll be dispersed into the land of the living.

Awwww......that's cute. But isn't that exactly what chemical companies wanted Scott Pruitt & Co paid lobbyists mucho dinero to relax those kind of safeties?  I feel bad for the citizens. I won't feel bad for the thousands of soon to be impending law suits. The storm is an act of g-d, reckless endangerment is not.

Save for  JJ Watt, I'm not sure what Texas would have done.  Since there is no Puerto Rican JJ Watt (no, not even Ricky Martin), it looks like if BLOTUS did such an "incredible unsung success" with the territory, well, the folks of North and South Carolina are f-u-c-k-e-d.

But here is where the folks about to get hit will prosper:  the GOP is going to fund everything and promise everything...........at least until the mid-terms.  It will be the legal way of buying votes.

Its amazing to me that Trump has the ability to completely fabricate a lie that's the exact opposite of the truth (about the USA's assistance in Puerto Rico) but just get away with it.

I fear for the folks in NC & SC, as it looks like there will be massive property destruction and possible loss of lives, and a week later no one will care. They'll all be futzing over Trump's next atrocity.