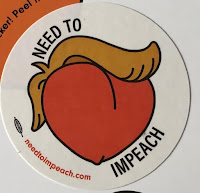 I didn't spend a dime on this sticker, though I'm paying for it through the nose with 4,157 emails per day on any given political candidate.

In theory, I'm all for impeachment - except for the alternative it leaves us.  Pence.

It's kind of like wanting Shrub impeached but being left with Darth Cheney.

Pence is no peach himself, and hopefully he's got other troubles coming his way - mostly in the name of newly turned Federal witness, Paul Manafort.

Pauly helped pick and vet Pence..........so you gotta figure he knows more shit about that ghost of a man than "Mother".

Am I the only one who feels the "leaked" story to the NYT about him thinking of secretly recording the fat orange one is made up and only a set-up to get Rosenstein fired?

If BLOTUS is stupid enough to derail the man - and the independent counsel of Robert Mueller - we have much much bigger problems.  All checks and balances are officially gone, and we know Congress won't have the spine to do a thing - even if the mid-terms go our way. A defunct investigation before swearing in is still a defunct investigation.

I read about this a lot but I sense there is no action behind it. It sounds all talk. I wonder if Pence would be worse - probably more so as he can think/plot and scheme while 45 makes things up as he goes along.