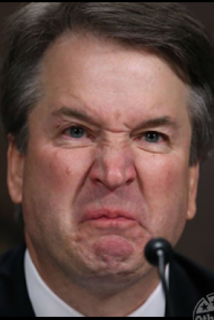 Is it wrong that I can't be bothered with these Kavanaugh hearings?

I can say {again}, "I heard".....be it this or that, because I really didn't watch any of it first hand.  Partly because I have a job. Partly because I could guess these senator's reactions - from both sides of the aisle.

From what I could tell, they came close to the mark on expectations.......right down to Miss Lindsey's melt down.  Can't believe she didn't get the vapors and need smelling salts. Lindsey that is. Not Dr. Ford.

By all accounts, Ford did well.  By all accounts Kavanaugh stomped his feet, had spittle, blamed the Clintons, and was extremely partisan - even though his intended role is supposed to rise above that.

Just as equally un-shocking, GOP moving forward with the vote today. At least they're supposed to - if they have enough votes that is, or think they do.

I'm hoping that's where the shock really lies. I have a glimmer of hope, but little would surprise me at this point.

Song by: John Mellencamp
Posted by Blobby at 12:01 AM

I wanna bitchslap that ugly face until it bleeds. and miss lindseybelle needs to loosen her corset a bit.

He cried because someone,especially women, dared to question his rich white male privilege.
He cried because he's finally remembering that he did this, after years of quashing it as "boys will be boys."
He's crying because, SCOTUS or not, he will always be Justice Penis in Your Face.


But still, the Oscar for Best Performance by an Asshat Scorned goes to Miss Lindsey Graham.Seriously, all that was missing was her clutching her pearls. She has a serious crush on Brett.

I can hardly wait for the results of the lie-detector test, which I hope he undergoes whilst clutching 'The Good Book'. Oh, he hasn't agreed to do one? Now I wonder why that is! - And btw: Why did no one ask him if he's ever exposed himself to girls/women?