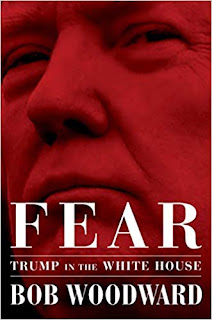 The last few days of book blurbs have given me a metaphorical hard-on.

We might not have to worry about impeachment with BLOTUS. You just gotta figure he's about to have a fucking coronary.

I love that the Minister of Propaganda Press Secretary immediately dismisses the book as "pure fiction fueled by interviews with disgruntled former employees".

Really?  The conversation between Gary Cohen and John Kelly was just those two. Are we calling Cohen a 'disgruntled former employee'? He was a douche, for sure, but I don't think so. Of course, maybe the story didn't come from anyone former.

I mean, you did read the anonymous op-ed piece in the NYT, right?  The call is coming from inside the house.

Could the inside senior staff person be WH counsel McGahan who just gave his resignation, but not yet gone?  Kelly himself (though allegedly he's wanted to quit, but clearly too wussy to do so)?  It can't be Melania......she cannot write this well.  Jared and Ivanka?  No.  They have their pardons in the bag. Jeff Sessions could be pissed enough at the thrashings he's been taking.

Back to Woodward's book though. My g-d.......I love one of his staffers said BLOTUS had the understanding of a 5th or 6th grader.  They wish!

The names his staff use for him are the same ones we use!  "Fucking Moron", might be over-used, but it is just so on the mark.

And BLOTUS complaining about Woodward. Classic. Let's say that Bob didn't tell BLOAT he was actually writing a book. Why. The. Fuck. Would. You. Talk. To. Bob. Woodward?   He's the Ronan Farrow of the Baby Boomers. No good can come of either one showing up on your door.

I almost feel the need to purchase Fear.

I'm thinking of waiting for the audiobook version, as read by Sarah Fuckabee Sanders.


Song by: Sarah McLachlan
Posted by Blobby at 12:06 AM

I imagine it becomes the "when did you stop beating your wife" question in this administration. There is no way to answer it.

I ordered the book yesterday. The NYT op-ed broke just as I was getting on the treadmill, great entertainment.

that's insulting to 5th-6th graders. the dump is more like kindergarten.