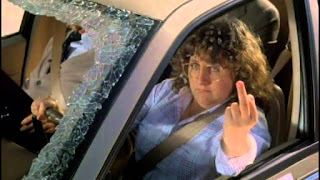 So yesterday morning I had an altercation with a "cop".   Yes, that is in quotes.

After safely dropping Shep at daycare, I headed into the office. The area between is pretty much residential, but with a main road having a 35 mph limit. As school buses are stating their rounds, I don't speed, but there's almost no need to either.

In my rear view mirror I see a black Mercedes weave in and out of traffic and yes, going through a red light. Not trying to beat it.  Solid red for a while. Just couldn't be bothered.   ....and now he's coming up on my tail quickly.  But we hit a red light and he can't go through me, so he's stuck.

But as we make the left turn onto a three lane, one way street, he goes for the far left lane. I'm in the far right which is a right turn only - and it's another red light. I knew it would be.  The timing is such that you cannot beat that sequence.

From the far left lane, he goes - again through the red light - and makes the right I'm waiting to make (as there is no right on red here).  He cuts off two lanes of traffic to do it. Being the dutiful citizen I am, I drive the way you're supposed to, only to catch up to him at the next light, stuck behind traffic he cannot get around.

Externally, Blobby extended a middle finger at his own windshield, figuring there was little chance the occupant in the offending car was looking in his rear view mirror at the same time.  There is probably a reason I don't wager on bets.

Also, you'd think I'd learn from expressing anything while driving.  Clearly, I didn't.

Maybe that was the trick. I called his (potential) bluff. He then took off. ....and fast.

He's probably a security guard at Wal-Mart or a meter reader and thought he could intimidate me. He wasn't driving a police car or an unmarked vehicle. He wasn't in uniform. Worse case scenario, he was going into the station to go on duty.  Or maybe no one called him on his shit before and figured it would come back to haunt him if he kept down that path.

Unlike the last time, this one didn't scare me, but I was annoyed as fuck for hours.  Now I'll be watching out for him every time I go down that road that time of the day.

HE was the asshole here. he probably got his "badge" at the dollar store.

There are fake cops everywhere. Glad you called his bluff.

He most likely bought a badge online and flips it to scare people off. And if he were a real cop, driving like that off duty and flipping a badge, internal affairs would be getting involved, because trust me, he's done this before, and it makes him feel like a big man. Probably Euclid trash.

But be careful. There are enough nuts out there.