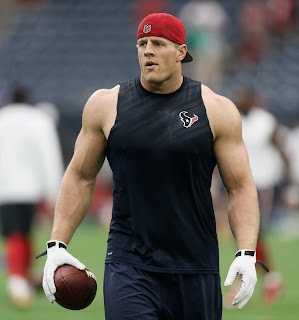 Not only is J.J. Watt hot, talented and genuinely seems like a decent guy, he's a do-gooder too.

He's doing one better for the families of victims in Santa Fe, TX.  ....if you can call this 'better'.  Watt is paying for the funerals for all the victims.

It's nice move in what should be an unnecessary gesture.

We have the usual dipshit politicians weighing in, of course. Again, just like clockwork.  The Lt. Governor of Texas - because the actual governor can't speak up? - citing too many exits and entrances in schools.

Guns don't kill people; too much egress does.  Of course, he's missing the obvious:  When (not if) a gunman got into the school, the students / targets are trapped with no way out.  Yeah Yeah - I know he meant only having one access point in, I'm assuming.  But you have to have multiple exits, so really, where there's a will, there's a way.

The bigger political jackass of course is BLOTUS. His insistence after the Parkland, FL shooting that something had to be done.  His snubbing of those students in person and then at the NRA national meeting where he puckered up, then extended his tongue firmly and deeply up their anuses.

He will be no change-agent when it comes to gun control, but of course, he had the fucking audacity to say, "This has been going on too long in our country. Too many years. Too many decades now.”

Is he fucking serious? Is he the last to know?

Grow up folks - he's placating you. He doesn't give a shit about school shootings unless it's about arming teachers and making sure the NRA is still happy. They're just words.....not even good ones.

So now the countdown clock has been reset. The silver lining is school is almost out for the year. So I guess - watch out churches!

Song by: Rosanne Cash
Posted by Blobby at 12:06 AM

congress - thoughts and prayers (cause we LOVE the NRA!)

parkland students - FUCK ALL OF YOU!

I stand with the students!

How many school shootings were there when you went to school? There were as many guns back then. Something has changed in society and its not guns. You are correct, most people don't look for the real causes of these shooting.

When politicians take $$$$$ from the NRA then how can we expect them to vote for gun legislation? They've been bought and paid for.