South of the Border (Down Mexico Way) 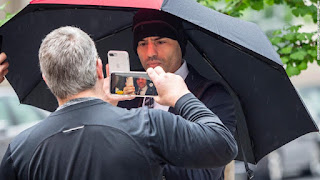 His rant in the restaurant wasn't his only video'd encounter with someone he thought was non and un American. Oh no. Videos are surfacing. This guy is just a dick.

I do love how people found him out in about 0.003 seconds: name. work. house.  I love how reporters stalked him out......followed him, badgered him, but with a lot less tenacity and vulgarness than he has displayed.

Oh - and the website for his office infers Español is spoken.......and he's happy to take the money of those clients who speak it the language. So why so hostile, Mr. Schlossberg?

(btw......his phone number is on the website. Feel free to call the number often.....and at inconvenient hours. Tell him I sent ya!)

I like that from whomever he was leasing his office space kicked his ass the the curb. That will come back to bite them, unfortunately. Not by Schlossberg himself, but the angry angry mobs that think like him.

What I cannot believe is that someone hasn't already rooted through ancestry.com or Ellis Island to figure out when his family emigrated here, which probably goes back two generations or less.  Because if you're truly going to shame him - find out his probable wretched past. His future is probably already set.

mister oh-so-high-and-mighty-white-male got pulled up by the short-n-curlies. hopefully more bad karma drops by to make his life a living hell!

I loved him being chased and begging to be left alone, because I imagine that's what the people he shrieked at were thinking, too.