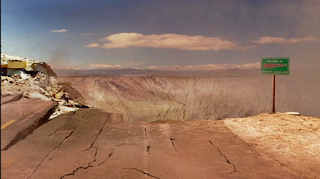 It all is beginning to make sense.

You've no doubt heard about the "sinkhole" on the grounds of the White House.  But is it?

Picture it: Sunnydale High Schools library. A seemingly uninteresting place, yet underneath it lurks the portal to Hell.

That's no sinkhole at 1600 Pennsylvania Ave - it's Hellmouth.

When you think about it - all that evil concentrated in one place, how could it not summon the devil?

Make no mistake, BLOTUS thinks he's the ruler of the netherworld, but in reality, BLOTUS is Satan's butt-boy. Forget Russia rigging the election, look no further than Beelzebub getting his minion where he needed to be to start the beginning of the end.

It's all so obvious now.

....and you morons thought it's just a sinkhole.   #fakenews!

My only wonder is:  where is Buffy when you need her?