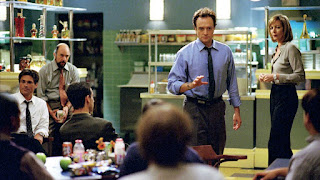 Yesterday (well, today actually - but when you read this it will be 'yesterday') I was IM'ing with my friend Rebecca.  I not only wanted to axe her something, but to try out a what I thought was funny Facebook post.

I'm not sure she found it amusing as I did.  Folks rarely do.

It involved pictures I took of myself  in a Barnes & Nobel (no....not like that).  She asked if I took them over to art history section so no one would see me.  Pfffft.  I said due to blogging and the iPhone, I have little to no shame in when I take a pic, or of whom.

That led to her comment that my blog entries have been less personal lately.  I never thought about it, but I suppose it's true. It used to be a post where I'd get on my soap box her and there, but then 11/8/2016 happened.

I suppose BLOTUS is somewhat to blame if I'm not as personal in my writing. Work is a part of that too. I seem to have little personal life that doesn't include dog walks.  I'm not complaining.....about the dog adventures, that is. I will continue to complain about BLOTUS.

I've taken to watching random YouTube clips from the West Wing. It oddly makes me feel better.  It soothes me, where I can almost believe there is some kind of hope out there. At least it does if you stay away from that horrid partial season where John Goodman becomes president. No. Really. I shit you not.

We, as a couple, really haven't done anything too exciting to even writ about. We are planning out summer get away, so I'm excited for that. We've opted not to go to Maine this year.  We will give the state a break...........and Mike too. Somewhere he's breathing a huge sigh of relief, while yet still trying to hold back his tears.

So we will see about my blog being more personal. As I type this it is more about a new lap top.  This is six years old and I cannot tell you how many times I've had to go back and type an 'e', as they're not just taking on the first try.  ....and it doesn't keep a charge.

This blog is pricey!

I loved the West Wing, until Aaron Sorkin left the show, the first time, and then Rob Lowe left, and then they killed Mrs. Valendingham. I think when they killed her they show lost its soul.

I found the West Wing in reruns on TNT or TBS, one of those Ts anyway. I liked it so much that I bought the first four or five seasons on dvd. I stopped watching after Rob Lowe left. It just wasn't the same.
As far as I'm concerned, you can post about the adventures of Shep and Sophie everyday (not that I don't find you interesting, you just can't compete with adorable furbabies).