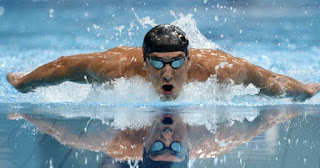 I can't even start with dipshit Jared, dipshit Ivanka and some dipshit evangelical preacher over in Israel who thinks all Jews are going to hell to open the new Embassy.

I do like how the media reports they're in "Jerusalem" and they barely mention the word "Israel".

But if dipshit evangelical guy really thinks these things, why would Ivanka and Jared want him there?  Why would he want to be around them?

I totally totally totally get his campaign for brushing teeth and saving water. Allegedly 42% of all Americans leave the faucet running while they brush their teeth - except you in Alabama, Arkansas and Mississippi - where we know you don't brush......or floss.....or have teeth.

If you brush for two minutes (and my motorized toothbrush says I do!), you waste 4 gallons of water - or what Phelps calls "one of the most precious resources we have (and need) on Earth".

Clearly, it's not a horrible idea to only turn on the water to rinse out your mouth and save some H20.  I think it would just come better by someone who didn't use multiple olympic sized pools, each with 660,000 gallons of it, throw in chlorine and other chemicals to lecture me on the waste of water.

Mike thinks we should all take shorter showers to 'save water'.

I get the irony that he needed to swim in a minimum of 17 olympic sized pools since 2000 to raise awareness about water conservation. That's 11,220.000 gallons of water right there.  But does he get it?

For the record, if I wasted 4 gallons of water brushing my teeth (which I don't), twice a day (which I do), I'd have to live 3,843 years to use the amount in which he has swam.

We all here talk about water conversation while golf courses and private pools consume water beyond measure.

Phelps isn't known for being the brightest crayon in the box.

(although Alabama and MIssissippi ARE on the bottom)

When I brush my teeth Inkeave the tap running. I have 2 baths (we don’t have a shower fitted in Denmark Hill yet) a day. I am a VERY bad person. I only drink bottled water - have you tasted London’s? Clearly I am going to hell.
JP