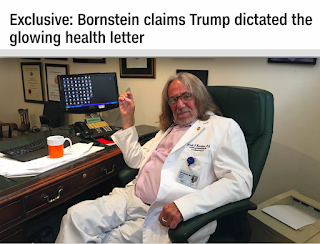 "His physical strength and stamina are extraordinary." If elected, Mr. Trump, I can state unequivocally, will be the healthiest individual ever elected to the presidency", allegedly wrote the doc

Is there anyone in the world who didn't think that BLOTUS didn't write that?  Or at least "encouraged" Dr. Crazypants to put it to paper?

I think the short answer is: "no".

No physician in the world writes a medical note like that. Don't get me wrong, I don't think BLOTUS put this guy in any worse of a light than he has put himself by taking on BLOTUS as a patient.

Now Dr. Insane is saying that BLOTUS' personal body guard came in and took all of BLOTUS' medical records.  Maybe he did. Maybe he didn't. Allegedly it happened months ago, but coming to light now (?).

First, was it even reported to authorities? There seems to be a whole lot of illegal going on there, should it have happened and the story isn't made up for attention, or deflection from the land of BLOTUS. I have to belief taking of a medical record is a felony.  (psssst......it's ok, the body guard will get a pardon.)

Of course, I don't believe a word that anyone in this administration - or anyone remotely associated with it - says.

At least the doc won't be held liable when the "239 lb" president keels over from his perfect BMI-attack. Not only can BLOTUS not prove the doc wrote it, the chart doesn't even exist...........anymore.

I bet Michael Cohen has it.