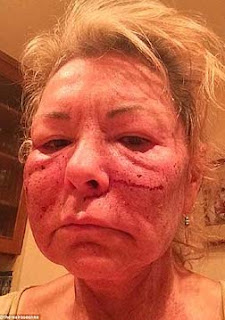 Her Ambien excuse was hysterical. Ambien's response was better.

Sounds like Roseanne went on a Twitter tear, reaming out many of her (ex) cast members who were appalled by her rants. She didn't appreciate that. Apparently to work with her, you have to agree with her shit too.

Oh - and her talent agency canned her ass too.

I did make the mistake of reading some of her supporters shit.  Do. Not. Do. That.

They're talking about all this fall-out from "one offensive comment".   Really!

Do you think Barr knows she wasn't really talking about Jarret's "looks" with a Planet of the Apes comment? It has zero to do with 'looks'.   These are the same primate comments that other right-wingers used for the Obamas.   ....but it's standard and accepted behaviour now.

Yes, she lost her job. She'll get another gig and faster that Kathy Griffin did after cutting off BLOTUS' head.  It only took the Dixie Chicks 13 years to have a sold out concert series after saying they were 'embarrassed' by the President. No name-calling. Nothing vulgar. Nothing racist.  ....and yet they're still not back on radio.  .....but "liberals" are the ones pushing the agenda with ABC and cancelling the series.  {sigh}

This folks, is how hypocrisy works.

Song by: Janet Jackson
Posted by Blobby at 12:06 AM

Not knowing what 'Ambien' was I googled it and am wiser now. (First time I've heard of it being used as an excuse for unforgivable behaviour). Pity it didn't put her to sleep quicker - and for a long, looooooong time. Seems this is just another variation of 'in vino veritas'. Scratch a racist - and guess what you find? A RACIST!

Hey Roseanne, use 'Ambien' in a sentence ...

Roseanne: "I 'Ambien' a racist.

I don't understand voracious hypocrisy. Maybe they don't notice it? It's like people bad mouthing others' children for the same behavior that their kids are doing.
I like the way Raybeard thinks.